If Shelly's feature debut were a CD, it would arrive with the pronouncement “File Under Quirky” with an attachment: “If you enjoy this, you may also enjoy Allen, Woody; Hartley, Hal; etc.” The waif-like, 30-something actress has proudly stapled her influences on her sleeve, though Sudden Manhattan is a wholly original piece when it comes right down to it. Shelly plays Donna, a 25-year-old New Yorker who finds herself questioning her sanity after she witnesses what appears to be not one, not two, but three separate murders committed by the same bearded man on the same street corner in as many days. The fact that the killer also sees Donna rattles her mightily, and when she immediately reports the shootings to the NYPD (frantically sputtering “I saw a murder!”), their reply is a curt, sardonic “No you didn't.” That's enough to leave even the stoutest of city dwellers mentally frazzled, but Donna also has to contend with an omnipresent rumbling that may or may not be in her head (although if truth be told, it sounds like her fillings might be picking up the David Lynch frequency); a Xanax-addled, lovesick friend named Georgie (Walch); Murphy (Rees), an NYU English prof who really, really loves her; and newcomer Adam (Guinee), a sexually dysfunctional actor and compulsive liar who's the closest thing she has to a boyfriend right now. On a whim, Donna seeks the advice of the psychic Dominga (Lasser), a rumpled old gypsy who tells her that she is trapped in a vortex, that life is suffering and torture “and then you die.” No comfort there. Ostensibly a dark ensemble comedy, Sudden Manhattan captures the ordinary madness of living in the dark heart of The City with surprising clarity; the street people, the oddballs at the daily deli counter, the aspiring anybodies are all richly drawn, as is Donna's inability to make sense of it all. A scene in which she decides to put on a happy face and greet the world with a pathetically fake smile plastered across her elfin face is simultaneously hilarious and touching. Trudging down the avenues while waving ineffectually at passersby, the psychic's words haunt her step: “I'm stuck in a vortex, I'm stuck in a vortex, I'm stuck in a vortex.” Shelly, to her credit, is an amazingly subtle comic actress. She can do more with one raised eyebrow or crumpled smile than most actresses can with their whole bodies. It's great fun and a bit thrilling, actually, to watch her drift through her film, huge eyes staring out of her too-small head, trying to make some sort of sense of the senseless. In fact, it's only toward the end that Sudden Manhattan falters -- a steady stream of new (and unnecessary) characters is introduced from nowhere, and the movie bogs down under the appreciable weight of suddenly contrived humor. Still, that's a minor complaint for such an affecting debut. I'm curious to see what comes next. 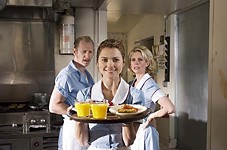 Waitress
Despite a storyline that involves an unplanned pregnancy, various affairs, spousal abuse, maternal ambivalence, and food-service employment, Waitress is an optimistic comedy about getting past your mistakes and making the best of life.