This year's Shaquille O'Neal vanity acting project features the sky-blotting LA Lakers pivotman as the armored crimefighter of DC Comics fame. Shaq plays former army metal engineer John Henry Irons, and there's a certain felicity in this; as a 53% career free throw shooter, the big guy has certainly hammered plenty of steel in his day. But when all is said and done, this is about as good a movie as you'd expect given a marble-mouthed seven-foot jock in the lead role, the creator of TV's Incredible Hulk in the director's chair, and Judd Nelson as the chief claim to artistic credibility. The story focuses on a top-secret soundwave cannon, developed by Irons and his electronics whiz colleague, Sparks (Gish). A former army mate named Burke (Nelson) has managed to copy the weapon for marketing to criminal elements. As inventors of the fearsome gizmo, Irons and Sparks (the latter now paralyzed by an injury suffered while testing the sonic gun), feel duty-bound to stop him. True to the grand comix tradition, their moral compulsion leads them to not only oppose evil but create stylish costumes and a secret lair full of enigmatic flashing machinery. Shaq is the executive producer here, and I find it credible that Steel is a true reflection of his personal “vision”: lots of Eighties and Nineties action clichés, some quintessential blaxploitation-flick chase scenes (pumping bass-and-horn music; bodies plunging off buildings into Dumpsters), and a little gravy for an old idol (Shaft's Roundtree guest-stars). There's nothing grossly nasty or offensive here. To the contrary, much of Steel has a disarming sweetness and ebullience that almost conceals the cloying, aspartame-like aftertaste. Of course, O'Neal can't act a lick and the story is senseless, but one feels inclined to let it slide because his persona is as ingratiating as it is calculated. Still, at the risk of sounding like George Will, the time has come to affirm the importance of standards. I fear that repeated exposure to movies like Steel, Kazaam, (Shaq's '96 flop) and Disney's upcoming, wretched-looking Flubber will give youngsters the idea that fobbing off this vacuous, desultory product as art is an honorable way to make a living. Steel's target audience of 12-year-old boys would be better off staying home and busying themselves at traditional, character-enriching activities: sniping at family pets with BB guns, playing Nintendo, and masturbating. Shaq, meanwhile should bag the movies and work diligently on those freebies. Knees bent, elbow steady, full follow-through… wish. 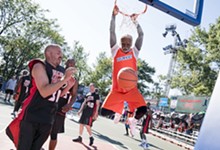