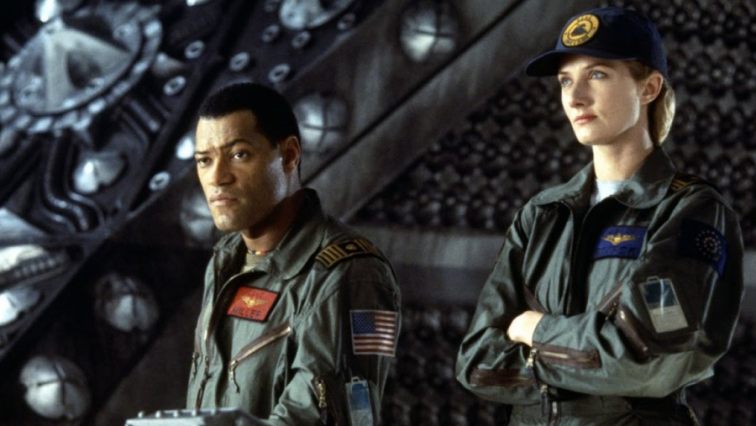 Event Horizon is an amusing foray into the cloudy realm of sci-fi/horror hybrids, if only because you can catch a glimpse of the occasional shamefaced parent leading a squalling and terrified tot out of the theatre and over to the slightly less gory Free Willy 3 that's unspooling next door. There were indeed several walkouts at the Event Horizon screening I attended, most of which were attributable to families who obviously had not a clue what they were letting themselves in for, though I suspect more than a few folks chose to exit thanks in part to Phillip Eisner's glaring over-reliance on horror show clichés and Fishburne's frightening and perpetually knitted brow. From its marketing-impaired title on down, Event Horizon is a steadily churning debacle that promises much more than it can deliver and ends up drowning in a crimson sea of gore and maddeningly out-of-place steals from other, better genre shockers. The Event Horizon of the title refers to a prototype starship that has been sent out to the distant edge of the galaxy and suddenly and unexpectedly returns one day after a seven-year break in communication. The Lewis & Clark, a search-and-rescue ship commanded by stern-faced Captain Miller (Fishburne), is sent to intercept the Event Horizon as it drifts past Neptune, and hopefully reveal the mystery of this interstellar Marie Celeste. Among the usual complement of cliché action figures onboard Miller's ship is Dr. William Weir (Neill), the architect of the Event Horizon and a fellow with piercing, squirrely eyes that seem to scream “Madman!” every time he blinks. You'd think by the year 2047 spaceship crews would be able to recognize trouble in their midst, but apparently that's not the case, and so when the Lewis & Clark finally docks beside the huge, cruciform body of the Event Horizon, it's quite clear already that there's trouble afoot. From this point on, director Anderson (Mortal Kombat) pours on the gore and tosses right out the pressure-lock what little logic the plot might have ever possessed. Any number of comparisons come to mind, but more than anything else Event Horizon will remind genre fans of Hellraiser II in outer space, from Anderson's admittedly rattling shock cuts to the huge, labyrinthine corridors of the marooned ship herself. Granted, when Anderson pillages, he only steals from the best, and so you'll find traces of The Shining, The Haunting, Aliens, and even The City of Lost Children cropping up all over the place. The only thing he's neglected to include, it seems, is a plot worth bothering with, a sad fact made all the more distressing by the filmmaker's obvious love for the genre. Like most of its characters, Event Horizon is a bloody mess, rife with powerhouse effects, but not much else.