Dream With the Fishes

It takes a lot of nerve to die, to leap from the bridge and commit suicide. So discovers Terry (Arquette), the timid, uptight voyeur who gets a helping hand (or was that a push?) from the mildly dangerous but terminally ill Nick (Hunt). The nerve, Terry comes to learn, is in the living, in going out with a bang and not a whimper. Nick, who has many unfulfilled fantasies and only a few weeks left to live, strikes a bargain with Terry: If Terry will bankroll a few of Nick's fantasies, Nick will return the favor by killing Terry. Such is the set up of this odd-couple road journey that veers between points of comedy and drama as Terry and Nick stave off the inevitable big sleep (with the fishes). Along the way, their picaresque adventures include nude bowling, flights of LSD abandon (including an inadvertently dosed cop who exerts deadly force against an army of donuts), and armed hold-ups of a pharmacy and a bank. Eventually (inevitably?), the two wind up in Nick's rural hometown, where he has some unfinished business to settle with his macho father and an old girlfriend. There they take up residence with Nick's zesty Aunt Elise (Moriarty), an exotic dancer who keeps her tassels mounted on the walls, and refresh an acquaintance with Nick's boyhood chum Don (Freeman). Nick's worried city girlfriend and tattoo artist Liz (Erbe) comes to join them once she's discovered where these runaways have landed, and the second half of the movie focuses on this little community as they mingle, cavort, and pass the time as Nick (who is unwilling to be hospitalized) grows steadily sicker and weaker. Good performances and strong camerawork add strength and focus to this otherwise narratively slight but appealing buddy picture. As Terry, David Arquette (Scream, johns) turns in some of his finest work to date, as he shifts under Nick's influence from an uptight peeper into a more extroverted participant in life's dramas. However, a subplot and its resolution about Terry's dead wife and another woman favored by his binoculars seems extraneous and incompletely developed. Dream With the Fishes is the first film by writer-director Finn Taylor, a screenwriter whose best-known credit is Pontiac Moon. His debut feature is a quirky journey the vivid characters and situations of which will be remembered long after the rest of the film's residue has washed to the sea. 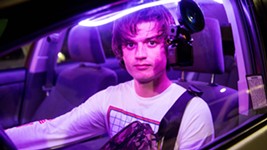