The Designated Mourner is one man's elegiac yet disdainful recollection of a group of people and a way of life that have vanished under the thumb of an unnamed oppressive regime. As the so-called “Designated Mourner,” film director and stage actor Mike Nichols (The Graduate, Silkwood, and The Birdcage) is spectacular in his first-ever acting performance onscreen. The movie is the film version of a play written by the multi-talented Wallace Shawn (My Dinner With André, Radio Days, Toy Story, Clueless) and mounted with great success last year in London with this same group of principals. Acclaimed actress Miranda Richardson (The Crying Game, Damage) and British theatre veteran David de Keyser join Nichols onscreen for this three-person drama; the renowned playwright and director David Hare (theatre: Plenty, A Map of the World; film: Wetherby, Strapless, and Damage) directs. It sounds so good in theory, but watching The Designated Mourner turns out to be a trying experience. It's no walk in the park, it's no Dinner With André. Told entirely in direct address, the three characters sit behind a table and speak to the camera and rarely interact. Jack (Nichols) is the central narrator who shares his memories of the years he spent in the company of this unnamed country's intellectual elite. He married the brilliant, no-frills Judy (Richardson), whose father Howard (de Keyser) is a revered poet and enemy of the repressive government. As the years pass, Jack grows increasingly aware of the degree to which he resents this pure and high-brow circle and he abandons them to pursue more “low-brow” interests. Meanwhile, the government steps up its repression of political dissidents, throwing them in jail and systematically destroying whatever cultural influence they ever possessed. Jack somehow survives, and thus becomes the designated mourner, and is now in the ironic position of being the only one left to remember their legacy. The three performers are so engaging and the writing delivers such regular sparks of poetic brilliance that these things, in themselves, keep the film from plunging into a fatal abyss. Yet, apart from the close-ups, there's nothing about The Designated Mourner that couldn't be done just as well (and probably more efficiently) with a taped audio book. The movie provides a permanent record of the play, and, hopefully, will lead to more acting work for Mike Nichols. But, otherwise, The Designated Mourner is wrapped in shroud. 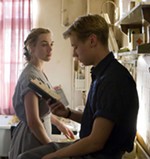