Only in America fashions a sprawling sense of a tempest-in-a-teacup madness, a madness that might also be described as Only in Dallas. The film employs a mountainfull of touchstones of modern Texas lore and suburban society life as it goes about the business of peeling back its piled-high narrative layers. Director Rusty Martin and producer Susan Kirr (recently transplanted to Austin) set high sights for themselves in their first feature-length film, which they shot two years ago in Dallas. An onion-skin storyline that keeps revealing set-ups lurking behind the scenes we're currently observing and a huge cast of actors would bode trouble for even the most accomplished and finely focused of filmmakers. Unfortunately, Only in America's ambitions far outreach its grasp. The majority of screen time is devoted to Only in America's film within a film: Just Say No to Satan. Set in the Plano suburbs, this plotline is rife with fatuous society matrons, vigilant anti-drug enforcers, dope-smoking teens, Robert Tilton-esque televangelists, a reputed psycho/hit man named John Wayne, and a Murdering Cheerleader Mom-ish intrigue about a woman who plans to kill the daughter of her next-door neighbor because it will increase her own property value (it almost, sort of, makes sense within the context of the movie). Another Only in America storyline involves the people who are filming Just Say No to Satan (and a guy who's filming a documentary about the filming of Just Say No to Satan). This second group of characters are seen in their offices, occupied with the latter stages of editing and unpleasant negotiations over acquiring insurance against lawsuits. Only in America's third narrative thread focuses on the nameless anti-drug agents who are gathering covert information about the filmmakers. With all these balls up in the air, much of what goes on in this movie remains fuzzy and perplexing. Some of what seems to have been meant as satire falls far short of the mark and, at best, is broad characterization. And the spottiness of these multiple storylines is more likely to confuse rather than enrich the proceedings. Instead of intertwining throughout, the storylines jam into each other with all the timing and elegance of a multi-car collision. Solid performances, good camerawork, and an effective score by Phish's Page McConnell help offset some of the film's more awkward moments. But, in the final analysis, Only in America is more crazy quilt than tapestry. 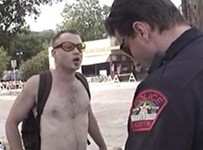 "Bike Like U Mean it"
Local filmmakers Rusty Martin and Susan Kirr's documentary is a thorough, even touching, study of Austin's vibrant bicycle community. The film covers the entire cycling ...