Young lovers in a Parisian cafe sip coffee, smoke, and debate their future: The opening shots of A Single Girl (La Fille Seule) strike an eternally familiar note. This pair could be the descendants of characters in a French New Wave movie by Jean-Luc Godard or Francois Truffaut. The trappings of youth culture may change with the decades but it seems the song basically remains the same. Valarie (Ledoyen) reveals to her boyfriend Rémi (Magimel) that she is pregnant and tells him that she intends to have the child. His response is diffident and she also informs him that she is trying to decide whether or not to break up with him. Then, leaving this morning rendezvous, she dashes off to begin her new job as a room-service waiter in a four-star hotel, promising Rémi that she will meet him back at the cafe in an hour to give him her decision. For the next hour or so, Benoit's camera follows Valarie in a facsimile of real time as she goes about her duties at the hotel and, presumably, ponders her future with Rémi. We watch her rush through the streets of Paris, change into her tuxedo uniform, learn the new job routines, meet co-workers and superiors, encounter a few hotel guests, make some phone calls to her mother, and, repeatedly, journey up and down the elevators and back and forth through the long corridors as she goes about her task of delivering breakfast trays to the hungry guests. This hour would seem like little more than a sterile directorly exercise were it not for the captivating allure of actress Virginie Ledoyen (La Ceremonie). Her face could be said to be one of those that the camera loves to photograph; it is understandable that Benoit keeps her constantly in his viewfinder's gaze. Filmed largely in close-ups and tight shots, the camera (frequently hand-held) maintains its rigorous focus on this single girl. I suspect the hour would seem much more tedious and enigmatic with anyone other than Ledoyen filling up the screen. Likewise, we are led to believe that Valarie's experiences during this hour and all that quality meditative time she spends waiting for the elevator help her to reach her important decision. But it would be presumptuous to think we have learned anything about her. We are given very few indicators of her thinking process or reactions to the given situation. We're free to fathom whatever we want. A coda that picks up Valarie's story following the birth of her child has an abrupt, tacked-on feel that contrasts with the fluidity of all that preceded it. Virginie Ledoyen is the single reason to see A Single Girl. 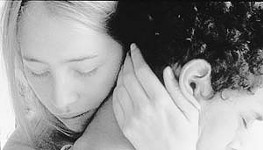 À Tout de Suite
Shot in jittery black-and-white 16mm, this French film's on-the-fly aesthetic captures the shiftlessness of bourgeois youth and some of the spirit of the French New Wave.