In this day and age, it's quite conceivable that those who do not reinvent history may be doomed to repeat it. If, like Cheryl Dunye, you're an African-American lesbian filmmaker struggling to find antecedents or self-reflections in the history and artifacts of cinema's first century, you'll come up rather empty-handed. Yet, should we be willing to accept the lack of evidence as incontrovertible proof that no African-American lesbian ever set foot on a movie soundstage? In her first feature film, Dunye blends narrative, documentary, and faux documentary techniques to create a fictional story about a would-be filmmaker named Cheryl (Dunye) who is researching the life of a minor actress from Hollywood's golden age credited only as the Watermelon Woman. Cheryl, who conveniently works in a video store, feels a connection with the Watermelon Woman from the first instant she lays eyes on the actress in a videotape of some obscure film from the Thirties. Her co-worker and housemate Tamara (Walker) can't fathom Cheryl's interest in this black mammy from the past and tries to focus her friend toward more popular pastimes like dating and socializing, but Cheryl grows increasingly consumed with making a documentary film about the Watermelon Woman. With great difficulty, she begins piecing together fragments of the actress' life and comes to realize that the sister was, most certainly, a real sister who was romantically involved with her white female director Martha Page and sang in the old lesbian clubs in Philadelphia (which is where Cheryl lives). Along the way, Cheryl begins a relationship with Diana (Guin Turner of Go Fish fame), a white female patron of the video store. The relationship confuses Cheryl and appalls Tamara and we begin to see the multiplicity of subjects that Dunye wishes to tackle in this film, all of which find resonances in the life of Fae Richards (aka the Watermelon Woman). An interview with Camille Paglia adds heft to Cheryl's documentary as the feminist theoretician expounds on the image of the mammy and the significance of watermelons, and photographer Zoe Leonard even created a fictional photo archive of the life of Fae Richards. Dunye's film is smart, sexy (the interracial lesbian lovemaking scene prompted an infamous little ruckus over at the NEA a while back), funny, historically aware, and stunningly contemporary. Much like the Roger in Michael Moore's Roger & Me, it ultimately matters little if we actually locate the movie's titular subject. The figure of Dunye's Watermelon Woman tells us more by her absence than she ever could in flesh and blood. With this film, the director has created something she calls the “Dunyementary.” I think the term frames it perfectly. 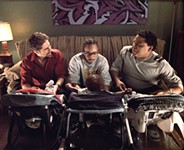 My Baby's Daddy
Three players learn how to be good fathers and real men amid lots of stereotypes and tastelessness.