For rural Florida beekeeper Ulysses Jackson (Peter Fonda), work is life's purest essence. Even when all-night toil in the tupelo swamps leaves his back so wrecked he has to sleep on the dining-room floor, it still beats dealing with a dysfunctional family that includes a jailbird son, a junkie daughter-in-law, and two young dependent granddaughters. Though decent to the core, Ulee (short for Ulysses) is clueless about human interactions more complex than peddling his fine tupelo honey. But when the son's old bank-robbing cronies menace his family, Ulee is forced to not only handle the situation personally but face how his own emotional desertion may have laid the groundwork for this crisis. Stoic, insular Ulee is a guy we've all met, and Fonda knows him better than most, having been raised by a classic of the type -- his acting legend dad, Henry. The younger Fonda, now 58, brings all of his childhood frustration and angst to the screen in one of the year's most unexpectedly brilliant acting performances. Working from a wise and insightful script by seminal indie director Nunez (Gal Young 'Un, Ruby in Paradise), he sucks every bit of dramatic marrow from the words on the page. Yet there's also an arrestingly singular and specific character to Ulee's beleaguered remoteness. It has a power that utterly consumes Fonda, transforming him in a way that's unprecedented in his work and granting him momentary access to the greatness his father channeled so intuitively. Peter Fonda's Ulee is both late-period Silent Henry and an earnest, compassionate effort to deconstruct that obscure figure. But Ulee's Gold is a terrific movie for reasons that go well beyond Fonda's career breakthrough. Nunez, who hails from Florida himself, understands the lives and sensibilities of the people who inhabit the state's humid hinterlands. Far from the images of white-trash squalor promulgated by most Hollywood product, there's a complex micro-universe here that Nunez takes the time to fully understand and interpret. Fine performances by Richardson (as Ulee's helpful doctor neighbor and potential love interest), Dunford (the daughter-in-law), and Zima (a veritable Ashley Judd in miniature who plays Ulee's youngest granddaughter) add richness and impact to the deliberately paced story. About that pace: Some are less than enthralled by Nunez's penchant for taking his sweet time telling his stories. It's a trait that induces lucid-dreaming serenity in his proponents, boredom in others. He's certainly no rock & roll filmmaker; lullabies are more his thing. But by the time the closing credits roll to the tune of “Tupelo Honey” by Van Morrison (as close a Nunez equivalent as there is in music), I was experiencing a flood of warm exhilaration that matched anything speed, volume, or bombast could hope to deliver. 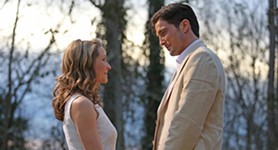 The Ultimate Life
This inspirational film based is both a sequel and prequel to The Ultimate Gift, and is based on Jim Stovall's novel.