Based on Con Air, you would never guess that Don Simpson no longer strides this mortal coil. Alongside longtime co-producer Jerry Bruckheimer, Simpson stamped his extra-large testosterone imprint on everything from Beverly Hills Cop and Top Gun to Flashdance and The Rock. This audience-gratifying tradition continues unabated since Simpson's untimely death last year, with Con Air containing more slo-mo fireballs and snappy one-liners than most all the other summer action movies so far. Big deal. Simpson and Bruckheimer always aimed for the lowest common denominator when it came to mass-market entertainment, and likely as not, they hit that sucker right smack dab in its slope-browed noggin. Con Air -- directed by relative unknown Simon West -- is no different, featuring scores of shots in which a) someone gets killed, b) someone else gets killed, or c) someone narrowly avoids getting killed, then pops off a pithy one-liner before killing someone else entirely. Also on board is Mark Macina, whose din-in-a-steel-drum score rivals his creatively bombastic work on Bad Boys, Speed, and, uh, Monkey Trouble. Just so you know who you're dealing with here. Storywise, it's Nicolas Cage versus everyone, as Cage's unjustly imprisoned-and-freshly-paroled Cameron Poe must fight his way home to his wife and baby daughter's lovin' arms when the prison transport plane he's riding in is hijacked by The Worst Cons in the Whole Wide World. Among them are Malkovich as criminal genius Cyrus the Virus; Rhames as an underground black-power movement leader-killer; and Buscemi as serial killer Garland Greene who, along with Cage, gets all the best lines. This is as it should be. There's nary a hint of suspense in West's film, though, mainly because he loudly trumpets the upcoming disasters so early in the film. You know you're in trouble when poor Mr. Poe nearly gets weepy over the stuffed bunny he's brought on board as a gift to the daughter he's yet to see. Cusack provides a nice turn as a U.S. Marshal who's the only guy in Poe's corner, but you can't help but get the feeling he's wondering what the hell he's doing in this film. Say Anything it ain't, nor is it The Rock, which, oddly, worked much better as a Simpson-Bruckheimer creation, giving Nicolas Cage's character at least a smidgen of reality to play with. Con Air gives him little else but the chance to strut his buffstuff and growl Stallonian non sequiturs with all the believability of Siegfried & Roy. To be fair, if you're looking to kill a couple of hours, there are worse fates awaiting you out there. Just don't ride Con Air expecting to go first class; it's cargo hold all the way. 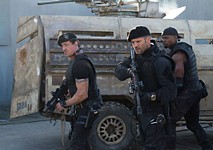