Robust, combative, big-souled, and unapologetically maudlin, Mark Herman's Brassed Off! draws its blood from the same universal workingman's heart as the English coal-mining culture it portrays. The semi-fictional story is set in the aptly named town of Grimley where, in 1992, the government austerity is threatening to close the local “pit” as part of a national trend toward nuclear power. With the whole town in an uproar, only one person seems oblivious to it all: Danny (Postlethwaite), a sixtyish musician who leads an all-brass band composed entirely of miners. Danny's a hard, inflexible old buzzard with little empathy for the outside problems his players may bring to practice. These troubles are epidemic, though, with families and marriages cracking up over money problems and his own son being menaced by loan sharks. Not even a worsening case of black lung can distract Danny from his dream of leading Grimley to the All-England championship. Postlethwaite, with his terrifying cheekbone structure and penetrating gaze, seems divinely ordained to play this character. Though Danny is from the same stock as his bandsmen, he's consumed by a mission he sees as transcendent. “Music is all that matters!” is his creed, and even the glazed expressions on his musicians' faces when he says it are tempered with traces of awe and respect. His slowly dawning awareness of the larger human issues at stake in Grimley -- and Great Britain as a whole -- set up a great moment when he delivers a fiery working bloke's manifesto to a stunned audience at the Royal Albert Hall. Helping Danny make his breakthrough is Gloria (Fitzgerald), a lovely young newcomer to the band who turns out to be the lead consultant responsible for advising management on the pit closure. Gloria embodies all the agonizing sides of the issue, ranging from homegirl loyalty (she's originally from Grimley) to stark reality (coal, though profitable, is nearly as lousy an energy option as nuclear fission). She's also falling in love with bandmate Andy, played by Ewan McGregor (Trainspotting) in a low-keyed, ingratiating performance that further illustrates his range and charisma. Ultimately, it's tough to render a go/no-go judgment on Brassed Off! Its virtues of passion and authenticity are somewhat undermined by predictable plotting, rampant sentimentality (including a lachrymose version of the schmaltz anthem, “Danny Boy”), and a certain chip-on-the-shoulder attitude that dares you to question how hard we should sympathize with saving the coal industry. In the end, though, the undeniable power and emotional richness of this film swing the balance toward the good. 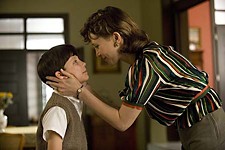 The Boy in the Striped Pajamas
Vera Farmiga is a knockout in this otherwise predictable and emotionally manipulative story about the horror of the German concentration camps.