Gustavo (Lavan of TV's One Life to Live) is the portrait of Cuba's “new man.” This young believer in the Revolution is a recent graduate of Havana's prestigious Lenin School who has been promised a government scholarship to study aeronautical engineering at the University of Prague (even though Gustavo's new Cuba holds out dim prospects for employment in this line of work). But as the events of the film unfold, Gustavo's bright dreams for his future (in which he believes he can achieve anything he wants) steadily crumble, and we watch as this upholder of the Revolution becomes a disillusioned would-be assassin of Castro. Bitter Sugar is a dramatic amalgam of true stories about life in modern-day Cuba, a place where material deprivation and ideological intolerance have created such a dissatisfied and restive population that the only happy citizen remaining on the island is Gustavo. There's an inescapable political agenda underlying Bitter Sugar that rules the film's dramatic progression and enfeebles its naturalistic flavor, making Gustavo's final transformation seem too forced and abrupt. Yet there's also an engaging likeability in this anti-Castro drama's mix of passion and politics. Bitter Sugar was shot in Santo Domingo with a cast of Cuban-American émigré actors, an appealing bunch who manage to locate and convey the humanity in each of their characters. Anchoring the movie is a timeless love story in which the handsome Gustavo falls for the lovely young dancer Yolanda (Vilán), an attraction so strong that it overrides their political opposition. Yet conditions force everyone in Gustavo's Cuba into moral compromises: Yolanda becomes a bar girl; Gustavo's father (Guitiérrez) quits his psychiatric practice to become a pianist in a tourist hotel bar where in one night he earns more in tips than he did in one month as a doctor; Gustavo's brother Bobby (Villanueva) is a rockero in a heavy metal band, who is tortured by the police when he protests the confiscation of his equipment and later injects himself with HIV-infected blood to further protest the government (a form of protest based on actual occurrences). There is also a stunning handsomeness to the black-and-white images (filmed by Dominican cinematographer Claudio Chea) of director and co-screenwriter Leon Ichaso (Crossover Dreams, Sugar Hill). Yet, the axe that grinds this Bitter Sugar chops its enticing raw product into uncomfortably prearranged cubes. 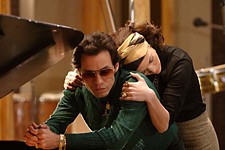 El Cantante
Jennifer Lopez and her real-life husband, Marc Anthony, portray the lives of salsa star Hector Lavoe and his wife, Puchi, in this biopic overstuffed with music-industry clichés.