When lovesick small-town astronomer Sam (Broderick) loses his one true love Linda (Preston) to the thrall of the big city, he packs up his things and goes in search of her, sure in his heart that she'll be back in his loving arms soon. His plans are soon stymied when he discovers that Linda has moved in with Anton (Karyo of Luc Besson's La Femme Nikita), a French émigré and owner of a swank Greenwich Village bistro. Unthwarted by this unexpected turn of events, Sam takes up residence in the abandoned tenement across the street from Anton's toney brownstone, where he embarks on a rigorous and wholly scientific study of the blissfully unaware young lovers, still certain that his lady love will yet return to him. Into this odd tableaux comes Maggie (Ryan), Anton's ex-girlfriend, the proverbial woman scorned. While heartsick Sam is only interested in returning his romance to the way it was before, Maggie (a bleached-blonde vision of East Village bohemia) would prefer that the callous Anton be hanged, drawn, and quartered. Uniting under initially separate flags, Sam and Maggie embark on a systematic dismantling of their ex-lover's newfound love, planting grandly contrived evidence of illicit affairs on Anton's person and increasing their espionage capabilities times 10. Director Dunne (who some may remember as Jack the Dead Best Friend in An American Werewolf in London, or as the harried businessman in Scorsese's After Hours) has a sly wit here, and Addicted to Love is more than the simple romantic comedy its uninspired title suggests. It certainly falls easily enough within the parameters of the genre, but Dunne wisely and quite ably avoids the many pitfalls and clichés (or a good number of them, anyway) that appear so ingrained in the storyline. For one thing, Addicted to Love starts off on a wholly unpromising note for young Sam. His nascent adventures in the spy trade catch him offguard initially: With Anton, Linda is a ferocious, passionately vocal lover, leaving Sam to ponder “but she was always so quiet with me.” Ryan's feisty, bitter Maggie (our first contact with her is as she zooms around the area on a large black motorcycle, clad head to toe in a tight, black leather racer's suit, and if that doesn't indicate feisty and bitter, then I don't know what does) is the perfect foil for Sam's broken heart; all she cares about is revenge, and when the two finally agree to work together, Addicted to Love soars to bittersweet comedic heights. Dunne's eye is sharp: There's a scene early in the film in which Sam constructs a camera obscura in the shadows of his tenement warren. Bathed in dull, grainy light stolen from Anton's apartment across the way, Sam whitewashes a wall and brings an image of Linda into view. It's a wonderfully inventive, surreal, and wholly original image, and Dunne's film has many such revelatory moments. The final reel's temporary lapse into maudlin sentimentality is perhaps unavoidable in light of all the terrific bits that have preceded it, but still, this is one of the most inventive romantic comedies to come around in some while. 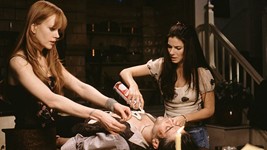 Practical Magic
If you can swing it, the most appropriate way to see Practical Magic would be as part of an evening that also includes dinner at ...