If there is such a thing as Divine Intervention, it should have interceded before writer-director Daniel Taplitz's feature debut made it to the theatres. Despite a fairly bankable cast and the financial backing of Hollywood's own King Midas, executive producer Ivan Reitman (director of Fathers' Day and Dave, producer of National Lampoon's Animal House and Ghostbusters), Commandments lacks the ability to effectively blend the dramatic and comedic talents of stars Aidan Quinn and Courteney Cox. Told as a modern-day parable by weasely journalist Harry Luce (LaPaglia), Commandments is really the story of Harry's brother-in-law Seth Warner (Quinn), a doctor whose recent life experiences make the Old Testament's Job look like a whiner. Having lost his wife and his house, Seth is having more than a bad year. He's having a bad life. When we first meet our protagonist, Seth is on the roof of an apartment building during a rainstorm, challenging God to explain himself. When he is struck by lightning and nearly fried, he decides that life as a God-fearing man is for sissies. Seth takes it upon himself to break the Ten Commandments one by one. Despite Harry's protestations, his wife Rachel (Cox) invites Seth to stay at their apartment while he recuperates. Given Seth's mission and Rachel's unhappy marriage to Harry, the rest of the film isn't difficult to figure out. However, its fairy-tale postscript definitely challenges the imagination. Without revealing too much, let me just say that it involves a whale and a lot of regurgitated fish. As for the lesson to be learned, I'm still puzzling over that one. Quinn, Cox, and LaPaglia are all fine actors; the problem lies not with them but with Taplitz's leaden jokes, wooden characters, and unsuccessful stab at black comedy. Perhaps beginning the film from Harry's point of view doesn't help either, considering he's not a particularly sympathetic character. Asking us to first identify with Seth through Harry only serves to mediate our sympathy rather than encourage it. Like most Hollywood movies, Commandments looks attractive, thanks in part to Robin Standefer's (The Rapture, New Age) production design and Slawomir Idziak's (Blue, The Double Life of Veronique) moody photography. But its slick packaging and dependable cast can't save Commandments from its own divine fury. As a final comment, let me invoke the eleventh -- and least known -- commandment: Thou shalt not see this movie without regret. 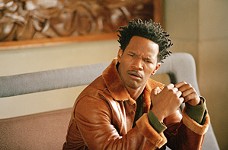 Breakin' All the Rules
Despite the title of this sugar-coated fluffbomb of an urban romantic comedy, precious few rules are broken, cinematically speaking, during its quick, painless 90 minutes.