Rosenfeld's take on filial piety, loyalty, and pressures of growing up in Brooklyn's mean streets may not be the most romanticized shot at brotherly love, but it certainly is one of the most tragic. A Brother's Kiss positively drips urban malaise, and though that in itself can become somewhat grating after 90-plus minutes, the director and a dead-on, brilliant cast sweeten the otherwise dark pot with a few melancholy rays of sunshine. Not many, though. Chinlund and Raynor play grown siblings Lex and Mickey. As young boys (portrayed by Pierce and Danowsky), they grew up in the shadow of the Brooklyn tenements, taking in B-ball free-for-alls at the neighborhood courts and watching an endless succession of their alcoholic mother's (Moriarty) low-life suitors amble drunkenly through their roach-infested, greasy apartment. Vowing never to drink, dope, or screw up in general, older brother Lex -- the family's chief caregiver -- pursues the unlikely dream of pro basketball (to no avail) while the shy, quiet Mickey enters the police academy and exits a beat cop. When Lex falls in love with a beautiful Latina named Debbie (Perez), which results in an unplanned pregnancy, he finds himself forced by his desperate financial situation to enter the drug trade and eventually loses nearly everything in the bargain, including his family, his brother's respect, and his once-powerful moral compass. It's a familiar tale, but this debut feature from Rosenfeld refuses to pull any emotional punches. Lex's sorrowful end is clearly telegraphed from the film's opening shots, but the director never allows that to diminish his onrushing storyline. Rosenfeld shoots the brothers' lives almost as a series of blackout sketches, documenting the inexorable reversal in their tangled relationship between protector and protected. At times, it's excruciating to watch. Rosenfeld's keen eye for gutter detail is flawless: This is a far cry from the Bed-Stuy 'hoods of Spike Lee. Instead, A Brother's Kiss drowns you in subtleties that range from the various Brooklynese dialects (some of which are occasionally impenetrable) to the rooftop block parties that mix inner-city machismo with phat, heavy beats, and not a little jungle fever. Marisa Tomei's brief cameo as a crack whore is yet another in a long line of brilliantly nuanced performances from the actress, and newcomers Chinlund and Raynor capture the enormous weight of brotherly and familial responsibility with unerring grace. Dark, gritty, and frequently unnerving, Rosenfeld's debut is also a thing of sinuous, uneasy beauty. 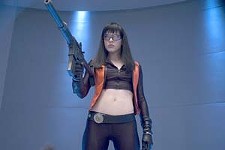 Ultraviolet
In an opening voiceover, a superhuman killing machine warns, “I was born into a world you may not understand.” Boy hidee, she ain’t kidding, and fully 88 minutes later, that world is still pocked with incomprehensibility. 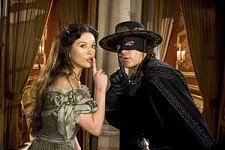 The Legend of Zorro
Whereas the Zorro of yore was a cunning subversive with a libidinous guerrilla panache, this new take with a tyke added is more like Leave It to Zorro.