Warriors of Virtue is a children's chopsocky adventure featuring a quintet of giant, otherworldly kangaroos that is directed by the man who brought us The Bride With White Hair, Parts I and II and produced by a quartet of sibling M.D.s from Denver. What the…?! Okay, okay, it sounds ridiculous and, rest assured, it is. Apparently Yu has decided to mine the ever-fertile fields originally tilled by Kevin Eastman and Peter Laird's Teenage Mutant Ninja Turtles, and mine it he does, populating his woefully silly stateside debut with every cheesy cliché in the book, from handicapped kids to ludicrously over-the-top villains to cornball dialogue so hokey it makes Jim Carrey look positively Shakespearean by comparison. Ryan Jeffers (Yedidia) is a young kid who just wants to play football and nail the babes like the rest of the guys. Stymied by a bum leg, his chances for success in the sporting life are next to nil, though, as is his self-esteem. Trying to make pals with the BMOC one lazy summer evening, he allows himself to be goaded into a dangerous situation -- which goes horribly wrong, natch -- and is quickly transported to the imaginary world of Tao, an alternate dimension ruled by the merciless (and strangely effeminate) overlord Komodo (Macfayden), who seeks to steal the powers of the “lifesprings” for his own nefarious purposes. The pools (and the rest of Tao) are guarded by the Warriors of Virtue, giant kangaroos with the powers of earth, air, fire, water, and metal. With the assistance of inscrutable Master Chung (Chao-Li), young Ryan must call upon his inner strength to save the day alongside his bizarre 'roo benefactors and somehow make it back to his own world. Borrowing heavily from a plethora of Jim Henson properties as well as the aforementioned Turtles, Warriors of Virtue fails miserably on all counts, stealing all the wrong bits and wallowing in a thick, swampy porridge of Eastern clichés. As a parody, it's not half bad, but I hardly think that's what Yu was going for here. Lackluster sets that look as though they'd been cobbled together from Ewok leftovers, stilted acting, and just plain boring martial arts melées do not an engaging children's morality play make. Nevertheless, Yu gives it his best, trying mightily to make something, anything, worth our interest. It's all for naught, though. Apart from Macfayden's just plain bizarre turn as the cross-dressing Komodo (I'm thinking William Shatner was his dialogue coach), Warriors of Virtue has little going for it. In fact, it has nothing going for it, let's be honest. Saban's animated Samurai Pizza Cats has more depth than this charade and more action, to boot. Best to re-rent the Eastman and Laird series if you're in the mood for interspecies kung fu, or even Tank Girl, which at least had Ice-T as the giant kangaroo pugilist. 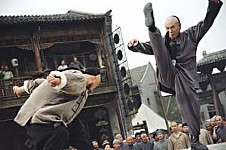 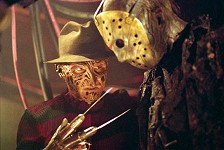