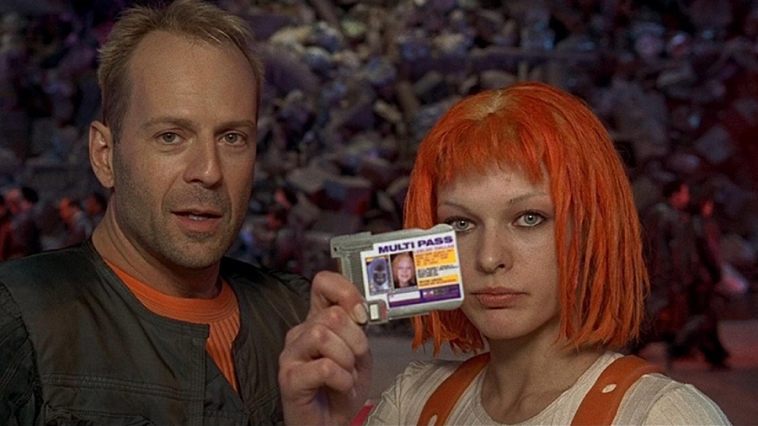 Now, officially, summer is here. The first real blockbuster of Summer ’97 has arrived and it's a French science fiction epic, no less. Granted, the French are far better known for their unfunny bedroom comedies than they are for their gripping speculative fictions, but of all the current French directors working today Luc Besson (La Femme Nikita, The Professional) is perhaps best suited to the job. Based on a story Besson wrote as a 16-year-old schoolboy, The Fifth Element chronicles the adventures of Korben Dallas (Willis), a 23rd-century New York City cabdriver who finds himself caught up in a grandiose mystery involving a 5,000-year-old evil that seeks to destroy all life in the universe, and specifically life on earth. The only line of defense rests with Leeloo (Jovavich), a genetically superior perfect being who literally falls in Dallas' lap one busy afternoon. Many others, however, are hot on Leeloo's tracks: the relentlessly nasty Zorg (Oldman); his backstabbing alien minions, the Mangalores; and government agents headed by General Munro (James). Working at cross-purposes, the various factions must attempt to secure or destroy (depending on which side they're on) a quartet of extraterrestrial stones that can help destroy the onrushing evil. Besson's film is a pretty straightforward affair, and once you cut through the glitz there's barely a skeleton of a plot, but that rarely detracts from what is essentially a gorgeous, electrifying visual smorgasbord. The Fifth Element actually feels like it was scripted by a daydreaming teenager, but in a good way; that is to say, there's a certain "gosh, wow" sense of wonder to the whole thing that echoes the completely unique universes of George Lucas and company. Besson completely immerses the audience in a crowded, murky future in which mankind has mastered the art of instant cloning and spread itself outward into the galaxy. Granted, much of this is a tip of the hat to Blade Runner, I think, especially in the New York City scenes where thousands of flying cars jam the colossal skyline and a thick patina of grime hangs over every shot and creates a funereal pallor. Even those who detest science fiction will have to applaud Jean-Paul Gaultier's striking costume design and Dan Weil's brilliant production design. However, it's Besson's brilliant editing and sly sense of humor that keep the two hour-plus film from bogging down; despite its grim storyline, The Fifth Element never takes itself too seriously. Oldman is hilarious as the effete, over-the-top Zorg; Willis plays essentially the same character he's played in his last five films -- ever the scruffy rebel; and Jovavich is gorgeous, charming, and thoroughly believable as Leeloo (thanks to some terrific post-English language skills). Even U.K. trip-hop sensation Tricky scores points as Zorg's right-hand toadie. Although the film tends to suffer from a severe case of overt preachiness in the third reel (shades of James Cameron's The Abyss), it's still a wonderfully visual, exciting ride. Besson remains one of France's great national treasures, and The Fifth Element is a surprising, delightful melange of old-school dare-deviltry and new-age sci-fi.