“You can never go home again, but you can shop there,” is how Martin Blank (Cusack) responds when he discovers that his childhood home has been razed and turned into a convenience store. This is just one of the surprises that awaits Martin when he returns to Grosse Pointe, Michigan, for his 10-year high school reunion. George Armitage (who, over the years, has directed Private Duty Nurses and Miami Blues, scripted HBO's The Late Shift and produced Roger Corman's Gas-s-s-s) solidly directs John Cusack (also credited as the film's co-screenwriter and co-executive producer) in a wacky joyride through Martin's whirlwind weekend in Grosse Pointe, one that includes a reunion with the girlfriend (Driver) whom he dumped on the night of their high school prom. To say that Debi is bitter is an understatement. Her surprise at seeing Martin again is outdone only by her reaction to his revelation that he is a freelance hit man. When Martin's kooky assistant (Joan Cusack) discovers that his next hit happens to be scheduled for his hometown during his reunion, she convinces Martin that he should take advantage of such an opportunity. Of course, the hit and Debi's life overlap in unexpected ways, and Martin must put his money where his mouth is and decide whether or not he is ready for early retirement. Hugely appealing on most levels, Grosse Pointe Blank does have a few graphically violent moments that seem out of step with the rest of the film. However, Cusack never fails to make me laugh and although this character doesn't offer much beyond the actor's previous roles, it's still a stand-up performance. Fans of Circle of Friends will see Driver in a different light as she tackles screwball comedy and Cusack's impeccable timing -- both of which she does admirably. Cusack's sister Joan (Toys, Working Girl) proves once again that comedic talent does run in the family, and Alan Arkin does a nice turn as Martin's rosary-toting shrink, a man unwilling to treat a client who never gets mad but always gets even. Grosse Pointe Blank dares to ask the question, “Can a nice hit man find true love at his high school reunion?” In finding the answer, the film proves that the course of true love seldom runs smoothly. The trick is to proceed with caution and carry a big gun. 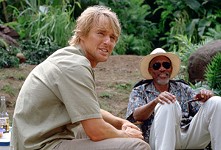