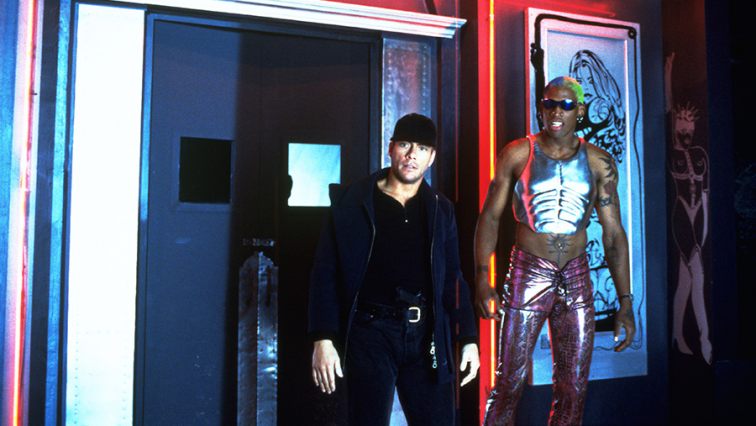 Absolute madness. The American debut of Hong Kong wunderkind (and UT alumnus) Hark is a mesmerizing tour de force that runs helter skelter through the very definition of “action movie.” This one's all over the map, sure, but even so, it's quintessential Hark: jammed, crammed, overflowing with wild ideas and set-pieces, so many of them that there's no way to keep them straight -- after a while, the crazed motorcycle explosions and laser-based water annihilation system all start to blur together into one impenetrable actionese gloop. Which is great, if you're looking for that sort of orgasmic, rock 'em-sock 'em wallop, but most of us aren't. Most of us would like a little sanity with our plotting. Still, fans of Hark's previous outings (Once Upon a Time in China series, A Chinese Ghost Story, Zu: Warriors of the Magic Mountain) will get a kick out of his Americanization. Taken with a grain of salt… a shaker of salt… uh, the Great Salt Lake, Double Team is an amusingly cartoonish actioner, full of James Bondian references and everything-but-the-kitchen-sink storytelling at its ridiculous, overblown best. Van Damme plays Jack Quinn, a high-level C.I.A. anti-terrorist operative assigned to take out the hideously evil Stavros (Rourke). Things go wrong when Quinn misses his target and Stavros' little boy is killed instead. As a sort of punishment for his error, Quinn finds himself imprisoned at The Colony, a sort of Roach Motel for ex-secret agents who are too risky to keep in the field, but too beneficial to kill. Here, he and other presumed-dead operatives assist world leaders with the constantly shifting balance of power. Not finding this to his liking, Quinn escapes, hooks up with flamboyant gun-runner Yaz (Rodman), and goes after Stavros, who has since kidnapped Quinn's pregnant wife. After that, well, many, many things explode, tens of thousands of automatic weapons rounds are fired, and a tiger eats somebody. There's more, but why spoil your fun? Perhaps the biggest question to many viewers will be: Can Rodman act? To which the only suitable answer must be: Does it matter? No and no. As partner in crime to Van Damme (himself a master thespian), NBA hellion/Madonna stalker Rodman need only “act cool,” which he does. With aplomb. The guy acts, looks, and probably eats cool. Whatever. Despite the plethora of shoddy, castaway B-ball gags thrown his way, Rodman is no worse than Van Damme, or, for that matter, Rourke, whose performance -- let's not mince words here -- could suck 5,000 tenpenny nails out of 200 concrete two-by-fours. Right back atcha, Mickey. Sure, Double Team is a mind-numbingly silly outing, full of gratuitous violence, testosterone-fueled goonishness, and acting turns that make TV's Van Patten family look positively Emmy-bound, but lest we forget, it's also pulse-pounding, often hilarious fun.