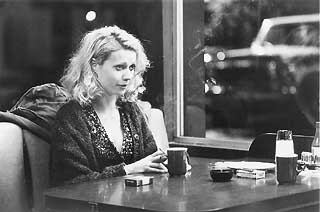 From the opening scene, in which a dapper old gentleman offers coffee and smokes to a scruffy young stranger lurking outside a highway diner, Hard Eight's narrative gears turn with the slow, sure precision of an observatory clock. The screenplay by first-time director Anderson focuses on two men whose quasi-filial bond runs even deeper than appearances suggest. In their first scene together, young John (Reilly) tells his impassive benefactor, Sydney (Hall), his dismal tale of boneheaded Las Vegas gambling losses and looming debt. The older man, who seems to already know everything about this simpleminded fellow, offers to school him on the fine points of casino mastery and help him out of the financial frying pan. John's dire need overcomes his suspicion about Sydney's motives, and the two head for Vegas. There, under Syd's tutelage, John does indeed learn to thrive both at the tables and socially, emulating his mentor's style and basking in the aura of his class-act reputation. Hall, one of our least appreciated great actors, is mesmerizing as Sydney, a sad-eyed enigma who seems to fancy himself an elderly catcher-in-the-rye for hapless young dimbulbs. Only in the late going do we learn his true motives for befriending not only John but an embittered waitress/hooker named Clementine (Paltrow), and for maneuvering the pair into a high-intensity -- if low-IQ -- romance. Lurking on the periphery is Jimmy (Jackson, in an oddly lackluster performance by his standards), a cunning vulgarian with compromising knowledge about Syd's past. Hard Eight is a small, deceptively complex story that yields its secrets and nuances in carefully metered doses. Each new revelation changes our perspective on what has come before, as well as our sense of the possible outcomes. In his ability to sustain mystery and provoke the imagination, Anderson earns comparison to writer-directors of the Soderbergh/Sayles/Dahl echelon, though he's not quite in their league yet. Still, it's rare to see a debut film so sharp, assured, and original (this latter virtue is doubly impressive given the overused setting) that it firmly establishes a director's potential to succeed on both the artistic and popular levels. Assuming his upcoming Markie-Mark Wahlberg vehicle, Boogie Nights, doesn't suck as vigorously as one fears it may, Paul Thomas Anderson can look forward to a long, estimable Hollywood career.