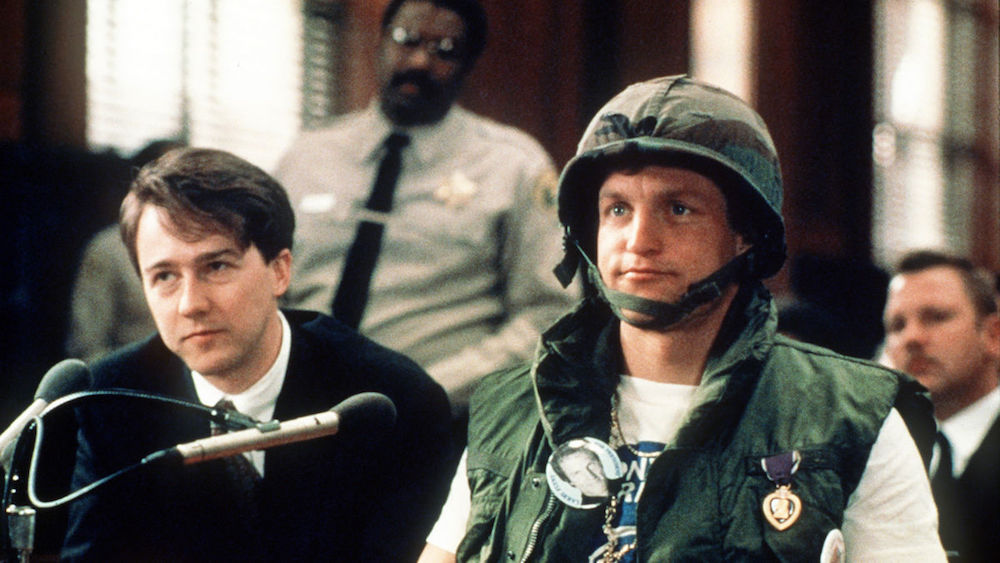 The People vs. Larry Flynt

A flag-waver for the free speech set, The People vs. Larry Flynt isn’t what you might expect it to be – it’s more raucous than raunchy. Using the trials and tribulations of the self-proclaimed smut king to teach a civics lesson in the meaning of the First Amendment, this audacious film will undoubtedly be reviled by feminists and fundamentalists alike for its refusal to judge Flynt’s fleshy commerce. (One of the film’s critics has pontificated that director Forman, who allegedly had never seen Hustler magazine before committing to the movie, would have never agreed to direct had he first seen a copy. Given that Forman – a Czech émigré – left his homeland while it was under totalitarian Communist rule, I’d guess he’d probably be more willing to undertake this freedom-of-speech project than one of his American counterparts.) Those disturbed by the film’s glorification (of sorts) of its white-trash Hugh Hefner – there’s nothing airbrushed about Larry Flynt – may rightly be concerned that less discriminating viewers will see it as elevating its subject to martyr status, as a forthright defender of American civil liberties, when in reality the man is nothing but a pornographer for profit. The truth is, however, that The People vs. Larry Flynt depicts its focal character as both hero and antihero. Flynt’s ascent into notoriety smacks of pure 20th-century Horatio Alger. Born to a dirt-poor Appalachian family, he got into the strip-joint business in less-than-hospitable Cincinnati in the 1970s, striking paydirt only when he began publishing a skin magazine that defied all notions of good taste. (A hilarious scene in which copies of Hustler are distributed to concerned – and “respectable” – citizens at a posh dinner, as evidence of the depravity that has entered their community, beautifully exemplifies human beings’ natural curiosity to look at the forbidden, even when it’s repellent and vile to them.) It is only when Flynt’s cash flow is threatened and the prospect of incarceration becomes real that he unwittingly becomes an advocate for constitutional rights. Still, if the First Amendment is to mean anything when it comes to the right of free speech, it must include the right to be selfish – to say what you think, rather than what others believe you should or should not say, regardless of what your motivation may be. Battered by obscenity trials and paralyzed by a sniper’s bullet, Flynt reaches his abyss in the 1980s – addicted to painkillers and mentally unhinged – all the while accompanied for the wild ride by his wife, Althea, the love of his life. Unlike most film biographies in which the love interest angle is an often obtuse one, the romance of Larry and Althea – the Sid and Nancy of porn circles – is a truly genuine one. All the notions of co-dependency aside, the film presents them as two people acutely attuned to each other, eternal soulmates by default because no one else in the world could love them as they loved each other. This unexpected poignancy, blooming amidst an unflinching portrait of the couple’s downward spiral – he was hospitalized in an institution, she died an AIDS junkie – easily makes The People vs. Larry Flynt one of the most adept movies seen in a while, especially when considering its satiric panache as well. Harrelson gives an almost fearless performance as Flynt, clearly relishing the thought of playing this American icon. (About halfway through the film, Harrelson’s timbre decidedly changes; was there any irony in this acting choice, in that he then sounds like a gravel-voiced James Stewart?) Harrelson is more than matched by Love in an open-wound performance. In an acting turn full of physical and emotional contortions, she gives herself wholly to the role of Althea, most likely because she’s actually lived it to some degree. When the perfect arc of Scott Alexander and Larry Karaszewski’s smart screenplay is completed, you may find yourself tearing up, but not in response to the tragedies that marked Flynt’s life. Rather, the unlikely culprit is the opening language in a United States Supreme Court opinion, in which the nine justices unanimously ruled in Flynt’s favor in an infamous lawsuit brought by the Reverend Jerry Falwell. The People vs. Larry Flynt is proof that you can find patriotism in the most unlikely of places. 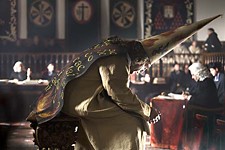 Goya's Ghosts
Neither a biopic of the artist nor a historical epic, Goya's Ghosts is a timeless study of the human potential for barbarism and hypocrisy.