Directed by the Enterprise's executive officer “Number One,” First Contact is what you might expect from Commander Will Riker (Frakes): action, action, chat, action. Not in itself a bad thing -- the Star Trek films have long come under friendly fire for being too heavy on the philosophizing and not enough so on the deep-space car chases -- but oddly, the film feels soulless and hollow, despite best intentions to the contrary. That may have something to do with the Borg, the hive-mind collective enemy that returns from Star Trek's televised run to make their big-screen debut. As the film opens, Picard (Stewart) is tormented by memories of his past assimilation by the Borg, and his brief life as the Borg Locutus. His mind is still linked, however tentatively, to the collective, and when, in the film's opening, the Borg attack Earth outright, he and the newly revamped Enterprise are sent away on a fool's errand, with Starfleet reluctant to let him in on the action lest he suffer a bout of Stockholm Syndrome. In grand Shatneresque tradition, Picard marshals his crew and, against orders, joins the fray, only to discover that the Borg have gone back into time and altered human history by destroying Zefram Cochrane (Babe's Cromwell, wonderfully over-the-top), the man who first pioneered the warp drive that powers the great starships and eventually made the “first contact” that introduced earthlings to other life in the universe and ushered in a new era of universe-wide brotherhood. Whew. Naturally, it's up to the Enterprise to follow the Borg back and set things right, and it should come as no surprise to anyone that they do just that. Along the way, they discover that this much-adored historical figure they've come to rescue (“I went to Zefram Cochrane High,” quips Burton's Geordi) isn't the heroic space pioneer they'd thought, but a hard-drinking coward, more interested in the windfall his famous flight might generate than its ramifications for the future. Also, along the way Data (Spiner) is assimilated by the Borg, and Picard must come to very Mevillian terms with his obsessive fear and loathing of his past captors. In all, the whole film flows less like the cinematic adventure it is and more like one of the television show's two-hour episodes. There are plenty of above-average set-pieces here, not the least of which is the whole of Starfleet's gripping, multi-ship attack on a gigantic Borg ship, but the film still seems cobbled together from past episodes and ideas (the character of Cochrane first made an appearance in the Sixties original Star Trek). It's enough to make you miss Khan. (See related story in this week's “Screens” section.) 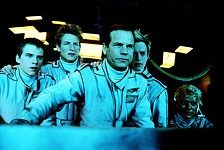 Thunderbirds
A TV show from the Sixties that starred marionettes gets the live-action treatment … or does it? 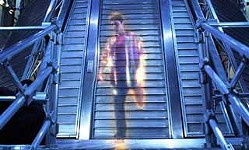 Clockstoppers
Frakes, aka Lt. Commander Riker of Star Trek: The Next Generation, has an apparent hit on his hands with this cunning blend of Nickelodeon-like visual ...