The Mirror Has Two Faces

Barbra Streisand has said that she thinks we're all looking for the “total experience” when it comes to love: companionship, romance, lust, and desire. In The Mirror Has Two Faces, her latest project based on a 1959 French film of the same name, Streisand comes to terms with this total experience using her trademark wit and wisdom. Directing herself, Streisand takes her acting back to its cinematic roots in romantic comedies such as What's Up, Doc? and The Way We Were. In Mirror, Streisand stars as Rose Morgan, professor of literature at Columbia University. Unmarried and still living at home with her beautiful, sharp-tongued mother Hannah (Bacall, in a tour-de-force performance), Rose pursues her passion for baseball, teaching, and sneaking Hostess Sno Balls under the eagle eye of matchmaker Hannah. When her younger, conventionally stunning sister Claire (Rogers) marries Rose's former boyfriend Alex (Brosnan), Rose is reminded yet again that while beauty may be only skin-deep, it goes a long way in securing a second date. Despite occasional bouts of frustration, however, Rose seems fairly satisfied with her life. It's everyone else who seems dissatisfied. Subsequently, Claire answers a personal ad for Rose placed by fellow Columbia professor Gregory Larkin (Bridges). Just as Rose has her demons, so does Gregory. Gregory's sexual desires so overwhelm other aspects of his life that he decides to find a woman with whom he can have companionship, possibly love, but not sex. Using the finely tuned logic that has made him renowned in the field of mathematics, Professor Larkin devises what he believes is a full-proof system for long-term commitment and happiness. When he finds this with Rose, he proposes marriage. What at first seems to Rose like a reasonable and satisfying pact slowly reveals itself to be “settling,” and thus begins her realization that indeed the mirror does have two faces and living life means recognizing both. Streisand and Bridges establish a remarkable chemistry in this film. Equally entertaining are Bacall, Rogers, and Brenda Vaccaro as Doris, Rose's best friend and sidekick in singlehood. The film bubbles along on the strengths of its performances and Richard LaGravenese's (Unstrung Heroes, The Fisher King) script. The most annoying aspect of the film (and especially baffling for a Streisand project), is its overheated “movie music” reminiscent of Seventies romantic comedies. Coupled with the appearance onscreen of George Segal as Gregory's best friend Henry, these moments produce a severe and not entirely enjoyable case of déjà vu. Some viewers who aren't committed FoBs (Fans of Barbra) may blanche when she appears three-quarters of the way through the film in full Barbra regalia as the transformed Rose. However, La Streisand has always had a keen sense for what the audience will tolerate, and she tempers her diva qualities enough to keep Rose consistent throughout the film despite the makeover by Donna Karan. The Mirror Has Two Faces may not be Oscar caliber on every front, but it's a lot like its star: sharp in its humor, self-assured in its eccentricities, and immensely watchable. 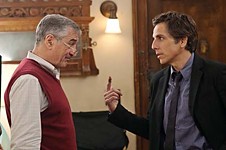 Little Fockers
Surely we're not the only ones Fockered out as this franchise aims for low-brow smut in its third outing.