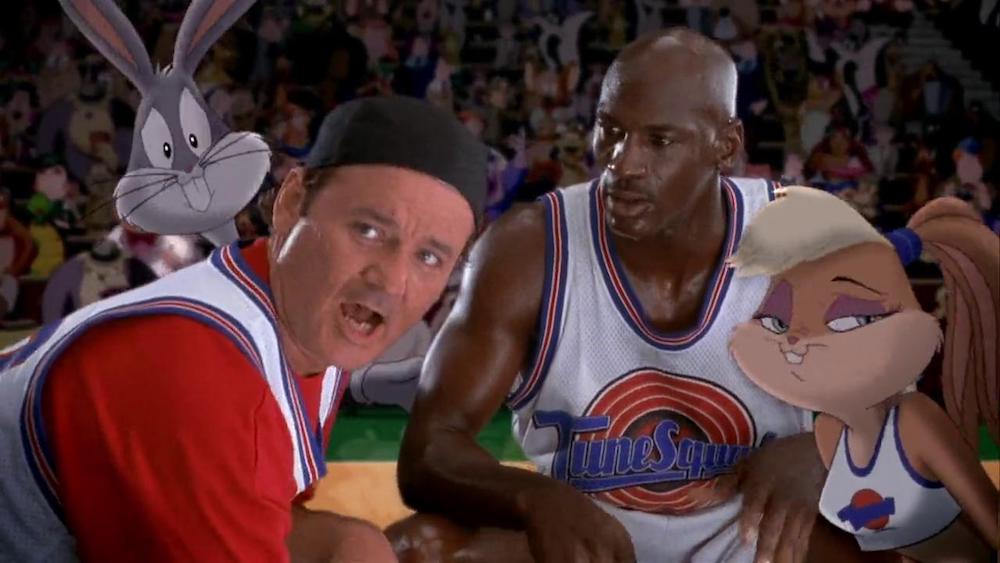 Space Jam lies directly at the point where the interests of art and commerce intersect. Less a movie than a merchandising phenomenon, Space Jam is, perhaps, best viewed as a “package,” something put together by agents and dealmakers rather than filmmakers. The amazing thing is that, despite such crass beginnings, Space Jam rises to the occasion and succeeds as an enjoyable piece of film entertainment. Dexterously mixing live action and animation, the movie tosses NBA champ Michael Jordan onto the 2-D court with the entire Looney Tunes gang and the opposing Monstar team of cartoon characters from another planet. Space Jam also represents the debut film from Warner Bros.' new Feature Animation division. In this initial attempt to topple Disney's dominance of theatrical animation, Warner's has revived the entire Looney Tunes mob -- they're all here, everyone from Bugs Bunny, Daffy Duck, and Porky Pig to Yosemite Sam, Elmer Fudd, and Tweety and Sylvester. Also, Warner's has also wisely released Space Jam two weeks ahead of Disney's expected chart-buster: the live-action version of 101 Dalmatians. It's actually quite a pleasure to see all the Looney Tunes characters back in action again, and the concept of teaming them together as a basketball franchise almost makes their ganged-up presence believable -- or as believable as a cartoon is ever going to be. And this is the heart of what makes Space Jam work: Wrapped around its meretricious little core is a solid cartoon story with engaging characters and dire problems. Nothing less than the fate of the earth is at stake. As an actor Jordan comes across as an affable film hero, with a presence and personality similar to the one he exudes on his many commercials and other public appearances. In addition to superstar Jordan, Space Jam features other NBA players: Charles Barkley, Patrick Ewing, Muggsey Bogues, Larry Johnson, Shawn Bradley, and Larry Bird. Of course, with all these elements in the mix, corporate product placement is rampant and obvious. Yet, the film also pokes fun at these realities as when Bugs and Daffy discuss residuals and whether either one of them has seen any royalties from all those lunchbox picture placements. That the movie works as well as it does is probably a tribute to producer Ivan Reitman, a master of comic filmmaking (Meatballs, Stripes, Beethoven, Dave) and no stranger to films involving technical challenges (Ghostbusters, Heavy Metal, Twins). This is the second feature film by director Joe Pytka, whose career in commercial filmmaking is second to none. However, oversight of the various interests involved in this project was more likely the work that fell to Reitman, and it's in achieving some kind of miraculous harmony that Space Jam is most successful.