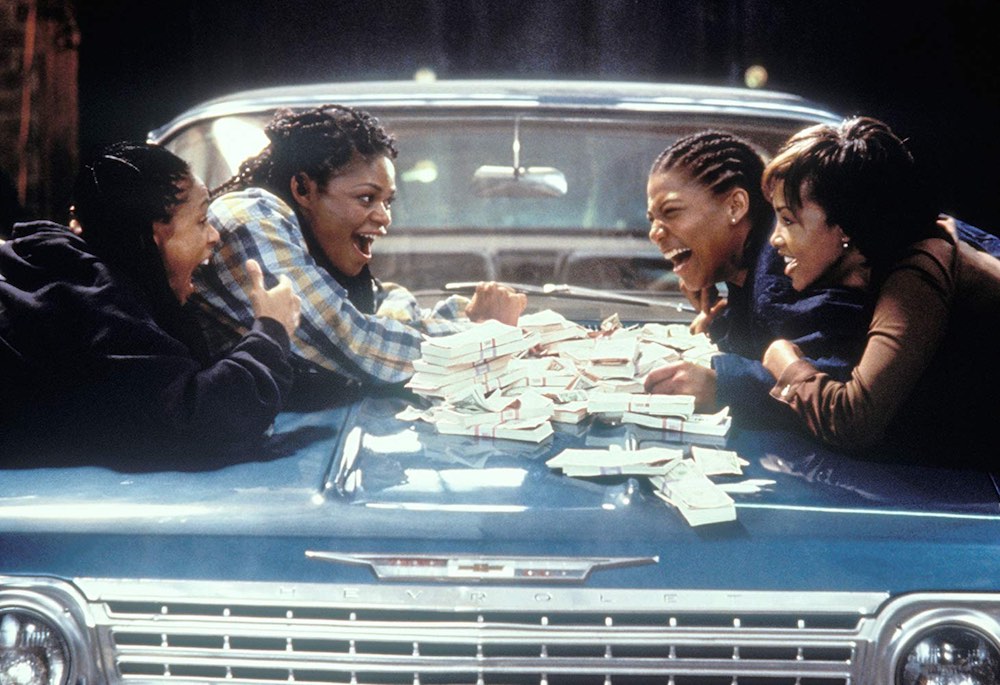 Set It Off's girls 'n the hood are the kind of bank robbers you find yourself rooting for. This action-heist drama about four young African-American women from L.A.'s housing projects is as much a story about friendship as a story about crime. And although its chock-a-block construction is often disconcerting as it tries to pack too much information into too little space while the melodrama and action sequences battle with each other for attention, Set It Off is a movie that demands to be seen… and heard. Outgrowths of the successes of Thelma & Louise and Waiting to Exhale, this female quartet is comprised, nevertheless, of fresh and original characters. For Jada Pinkett and Queen Latifah, their performances in this film are career-makers despite the fact that the script gives them too little to work with. This is the second feature film from acclaimed music video director F. Gary Gray (his first was last year's unassuming little comedy Friday) and no doubt some of the film's choppiness is due to his relative inexperience, although the script by Takashi Bufford (House Party 3) and Kate Lanier (What's Love Got to Do With It) leaves no emotional stop unpulled. As it examines the motivations that spur the friends into crime, the movie overextends its hand with overwrought depictions of the abuses heaped upon the women by the injustices of the social system. In a rivetingly shot opening action sequence, bank teller Frankie (Fox) is unwittingly thrust into the middle of a bank-robbery crossfire. Because she recognizes the stick-up man from the 'hood, this girl from the projects, who until now has advanced in the world by doing the right thing, is subsequently fired for collusion. Her unjust dismissal is what drives Frankie's desire for revenge. Likewise, Tisean (Elise) abruptly loses custody of her baby after the child suffers an accident while at her workplace, and Stony (Pinkett) sees her younger brother, whom she had hoped to send to college, fatally shot by ruthless cops in a case of mistaken identity. Cleo (Latifah), a swaggering butch lesbian, has the fewest gripes with the system (whereas Stony wants to use her share of the heist money to get away from the projects, Cleo can't imagine any life away from the 'hood). Although thrills and excitement are Cleo's initial motivations, it is she who winds up being the quartet's hell-bent mouthpiece for sisterhood and defiance. Latifah brings an extraordinary presence to the proceedings, and not just in her no-fuss approach to Cleo's sexual orientation. Both in the way that she scowls and glares at her adversaries and the way that she delights in her friends' company and her new-found job skills, Latifah brings something new and startling to the traditional screen depiction of women, something that comes across as so completely indifferent to how she's perceived by any camera or viewer. Set It Off experiences further bumpiness from such sidelines as the pace-altering romance between Stony and the buppy banker (Underwood) she meets while casing his place of business and throwaway sequences like the one in which the women act out a jarring Godfather reverie. The movie is, ultimately, a fascinating victim of its own ambitions.