Dog meets werewolf in this sometimes stylish, sometimes boorish take on the ever-persistent man-into-wolf genre. Red, who rocketed to pseudo-fame after penning the enormously entertaining The Hitcher, later moved on to direct Body Parts, a mish-mash of psychological horror and gore. Bad Moon continues the Red tradition of wishy-washy, self-directed shockers, with Eddie and the Cruisers' Pare playing globe-trotting photojournalist Ted Harrison. The film's opening moments find Pare traveling with his girlfriend through the wilds of Nepal, shooting the local flora and fauna and planning their next move. During an extended bout of lovemaking, the pair is attacked in a graphic scene of carnage by what appears to be an eight-foot-tall lycanthrope that leaves Harrison's girlfriend utterly deceased and Ted the victim of the wolf's highly contagious bite. Cut to the Pacific Northwest, some months later. Harrison is back in town visiting his older sister Janet (Hemingway, looking every bit the part, if not always sounding it), her young son Brett (former “Dennis the Menace” Gamble), and the family dog Thor, a hefty German shepherd. Harrison parks his Airstream trailer in the family's back yard and hangs around, taking long, moonlit strolls and generally acting creepy while reports begin to trickle in from neighboring communities of killer animals loose in the forest. Bodies begin popping up faster than you can say Maria Ouspenskaya, and it seems everyone is completely oblivious to Harrison's reprehensible lunar activities. Everyone except Thor, that is. Sensing the change in his former friend, Thor (Primo) begins a complex dog-versus-wolf battle of wills, although it looks like Thor may have bitten off more than he can chew when he finds himself mistaken as the man-eating culprit. Red's film isn't nearly as pretentious as it might sound: It's based on the novel Thor by Wayne Smith, and to his benefit, Red keeps the family dog at the center of the action, making him not only the most important character here, but also the most believable. Even silly dog's-eye-view shots taken, it seems, from films like Wolfen can't dilute the canine hero's onscreen charisma. For their parts, Pare and Hemingway come across as little more than adequate, with Pare's shape-shifting histrionics going overboard perhaps one time too often. And the werewolf effects? Well, Bad Moon's lycanthrope resembles a cross between Rob Bottin's celebrated work in Joe Dante's The Howling, only not quite as realistic. Many close-ups of the creature linger micro-seconds too long, giving you that precious extra moment to realize that, yes, that looks fake after all. The transformation itself is aided and abetted by computer-morphing technology to ill effect, as well. Bad Moon isn't the worst werewolf film I've seen (that dubious honor rests on the furry mantle of The Howling II), but it never quite manages to pull off the knock-down drag-out horror it so obviously seeks.

Manhattan
Allen’s stunning use of black-and-white cinematography (by Gordon Willis) and music score by Gershwin makes this meditation on love and life in New York one ... 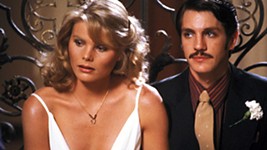 Star 80
The brief life and sordid death of Playboy Playmate and budding screen actress Dorothy Stratten at the hand of her unbalanced husband is the subject of this infamous incident and much-storied film.