Another Halloween, another Stephen King adaptation. This time out, it's more precisely a Richard Bachman (the pseudonym under which King's book was originally published) novel that's being adapted, but the old adage holds just as true: If it looks like a corpse, smells like a corpse, and, most assuredly, if it walks like a corpse, well, hell, it's gotta be a Stephen King film. For those who read King's book, there are precious few surprises here -- director Holland (Fright Night, Child's Play) stays true to both the novel's grim tone and pulp-fiction pacing, tossing in just enough of Greg Cannom's grisly makeup effects to keep audiences on their feet. Billy Halleck (Burke) is a privileged Maine attorney who finds it much easier to keep gangsters out of jail than keep the weight off his own bloated body. At 300 pounds and counting, Halleck makes his daily rounds equipped with fistfuls of candy bars and Doritos at the ready; he's the Pillsbury Doughboy with a law degree. Returning home from a party one night, Halleck accidentally runs over an ancient Gypsy woman, and soon finds himself on the receiving end of a ghastly Gypsy curse: No matter how much he eats, the weight, suddenly, irrevocably, comes off. Halleck is at first overjoyed. As his friends say, he finally seems to have found a diet “that works.” It works even better than Richard Simmons could have dreamed and, before long, Halleck is an emaciated, walking skeleton, while the town's judge and sheriff (both of whom helped him weasel out of the charge of involuntary manslaughter in the Gypsy woman's death) are simultaneously facing their own hideous curses. At wit's end, he calls on mobster buddy Richie Ginelli (Mantegna) to help him out and, if possible, lift the curse. Apart from its rushed pacing and occasionally stale dialogue, Thinner suffers even more from the fact that it has no redeemable characters. Halleck and his co-conspirators -- the judge and sheriff -- are cocky, cruel good old boys, while the Gypsies are vengeful, depraved outsiders. Even Halleck's wife and doctor are engaged in an illicit affair of their own. Simply put, everyone here deserves exactly what they get, and when their retribution arrives, it's hardly a surprise. King fans will want to note the author's cameo as a bumbling druggist, but that's not enough to save Thinner from being yet another adaptation that loses almost everything -- heart and soul and pounds -- in the translation. Fright Night
In this hybrid comedy/horror film, a suburban teen is convinced there's a vampire living next door. 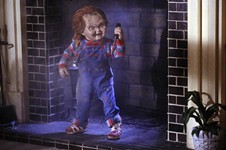