Carmen Miranda: Bananas Is My Business

We all know the screen image of Carmen Miranda: the fiery Brazilian bombshell in the fruit- and banana-bedecked hat, the samba songstress and mistress of the language-mangling malaprop, the invariable Latin Chiquita or Lupe who added exotic spice to dozens of international films. Carmen Miranda: Bananas Is My Business is a documentary that wants to find the person behind the stereotyped Hollywood icon. The movie delves beyond the standard biography to discover the woman who became a victim of the same imagery that was also the key to her enormous success. In 1945, Carmen Miranda was the highest-paid woman in Hollywood. By 1955, she was dead from a heart attack at the age of 46. Only a few months before her death, she had been treated with electroshock therapy for severe depression. What happened along the way? Born in Portugal in 1909 and raised in Brazil, Miranda used her talents as a milliner to gain entrée into the upper echelons of Brazilian society. In a rags-to-riches tale, she grew to become a popular samba singer and movie actress in Brazil before her discovery in 1939 by Lee Shubert, who signed her to a Broadway contract. After taking New York by storm, Miranda was stung by criticism back home that she had become Americanized and cartoonish. Moving on to Hollywood, her presentation became ever more exaggerated and over-the-top, perhaps best exemplified in Busby Berkeley's 1943 film The Gang's All Here. Bananas Is My Business also suggests, most interestingly, that Miranda was used during wartime as an instrument of this country's Good Neighbor policy toward South America, which only added to her deteriorating reputation back home. A bad marriage and the passage of time which caused what had once seemed exotic to suddenly appear gauche, gradually turned Miranda into a sad shell of her former self. Commentary from friends and family in Brazil and performers such as Cesar Romero and Rita Moreno add knowing context to the struggles Miranda must have faced. Directed by Brazilian filmmaker Helena Solberg, the documentary also has a very personal sensibility. As the movie begins, Solberg relates how, as a child, her parents forbid her from attending Miranda's funeral, a event which brought out a million of her countrymen. Ever since, the image of Miranda has burned brightly for Solberg. For anyone interested in the mechanics of the Hollywood star machinery, this 1994 documentary, which originally aired on PBS' P.O.V. series, serves up images from the dark side of the moon. 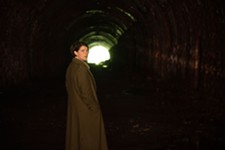