From the pen of Rich Wilkes, whose less-than-illustrious screenwriting career has thus far given us such execrable comedies as Airheads, Billy Madison, and The Jerky Boys, comes the equally insipid Glory Daze, a loving, if not particularly funny, tribute to the slob-comedies of the Eighties, or, in other words, it's an Animal House wannabe with a condescending Gen-X slant. The thin story line follows the misadventures of five “young, stupid, and unattached” college buddies as they decide whether or not to part company and get on with their lives, or spend one more year chugging beer, throwing parties, and causing trouble as a reward to themselves for finally completing school. Glory Daze, which also serves as Wilkes' directorial debut, spends an awful lot of time trying to convince us how hip and cool its main characters are – especially Jack (Affleck), the self-appointed leader of this group of misfits, who skates, sports a goatee, wears Hate T-shirts, and says things like “I'm as happy-go-fuckin'-lucky as the day I was born” – without ever really endowing them with any truly likable qualities. The young, spirited cast tries hard to compensate for this oversight, but it's just no use. On top of all this, the film's sense of social satire is hopelessly pedestrian, the dialogue stale (“He changed his major more often than his underwear”), and the editing is amateurish, with many scenes beginning too late and ending too early. There are a number of familiar faces wasted in useless cameos (examples include Spalding Gray, Mary Woronov, Brendan Fraser, Matthew McConaughey, Meredith Salinger, Alfred Sole), yet another telling sign of Glory Daze's desperation to keep the audience interested in a not-so-interesting movie. 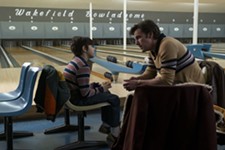