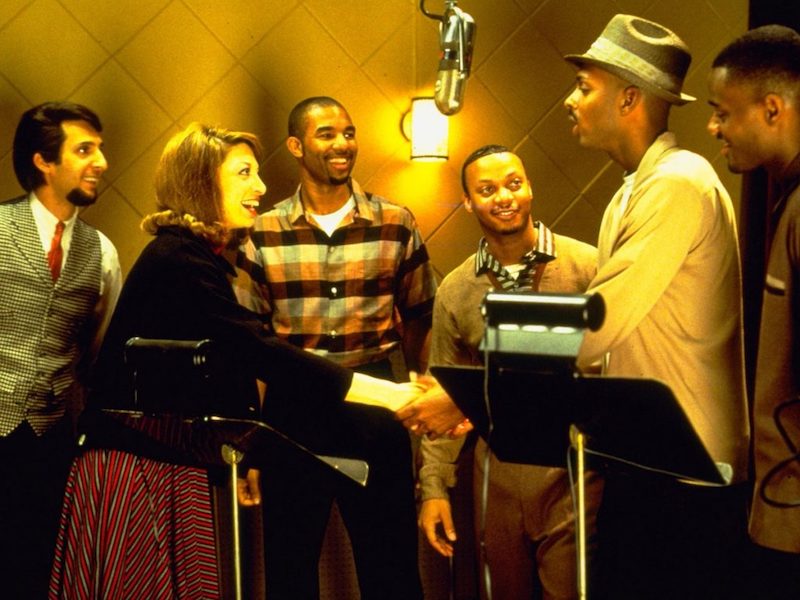 Grace of My Heart

Edna Buxton (Douglas) is an heiress from Philadelphia who, at the beginning of Grace of My Heart, wins a singing contest that launches her transformative career as pop songwriter Denise Waverly. Loosely based on the career of Carole King, the movie takes the story of one woman's songwriting career and her journey toward self-expression and sets it against the tapestry (if you will) of American popular culture and the development of rock & roll from the doo-wop sound of the late Fifties to the psychedelia of the late Sixties and early Seventies. Along the way, Denise crosses paths with a number of recognizable industry types. The men in her life include her mentor and record-producer Svengali Joel Miller (Turturro in an intentionally bad wig); writing partner and husband #1 Howard Caszatt (Stoltz); married music critic and radio deejay John Murray (Davison), who would rather just remain “friends”; and eccentric and pathologically paranoid pop music genius Jay Phillips (Dillon). Gal pals include singer Doris Shelley (Warren) and songwriter Cheryl Steed (Kensit), who graduates from competitive enemy to best friend and writing partner. Viewers with some knowledge of behind-the-scenes rock history will have fun matching up the real-life characters with their onscreen counterparts. Yet none of them will match precisely because what Anders has created with these characters is a pastiche -- and a very familiar pastiche at that. Also increasing the sense of familiarity is the film's wonderful period costuming and the wall-to-wall soundtrack that blankets the action with a barrage of songs written expressly for the movie by such contributors as Elvis Costello, Burt Bacharach, Lesley Gore, Carole Bayer Sager, J. Mascis, Sonic Youth, and many, many more. Though the movie dovetails too much toward the end into the saga of Jay Phillips' mental disturbances and loses sight of whose saga this really is, it's nevertheless an interesting tangent and hardly the movie's dominant problem. Douglas' lip-synching and body language while singing are woefully bad and distracting. More damaging, however, is the movie's conflicting narrative progression which both presents Denise as both a blossoming talent who discovers her true self through the passage of time and also a ready-made talent who, all along, knows exactly what she wants -- at least artistically speaking. Nevertheless, for anyone with a soft spot for this period of American cultural history, Grace of My Heart is a solid sender. 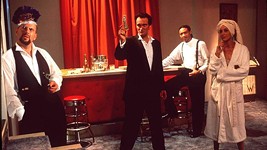 Four Rooms
What must have seemed like a positively brilliant idea at the time -- a quartet of short films by four of American cinema's most promising ...