A project developed at Robert Redford's acclaimed Sundance Institute, Feeling Minnesota (the title is taken from a Soundgarden lyric) may have the polish and sheen of a studio job, but feels more like an extended student film brought to unnecessary, lengthy life. Crammed as it is with more twists, turns, and so-called surprises, it never hangs together properly and begins falling apart almost as soon as it begins. As director Baigelman's debut film, it repeatedly begs the question, “Why?” on everything from casting to the endless plot complications that crop up every reel like thoughtlessly contrived stumbling blocks tossed out just to keep the audience on their toes. Reeves is Jjaks, a scruffy typo of a loner who returns to his Minnesota birthplace at his mother's behest to reluctantly attend the wedding of his thuggish older brother Sam (D'Onofrio). Sam, a low-level crook in the employ of Delroy Lindo's Red is enjoying the nuptials, unlike his bride-to-be Freddie (Diaz), who has essentially been forced into the deal against her will by Sam's Tarantino-esque boss. When she spies Jjaks, their eyes lock momentarily and, the next moment, they're in the bathroom, going at it like two teenagers in heat. Due to the sudden and unexpected death of his mother later that day, Jjaks sticks around a while, falls for Freddie, and eventually high-tails it out of town in a stolen car with Freddie in tow. There's a gun or two involved, so things promptly go from bad to worse, but unlike the grungy little slice of life the film so obviously is meant to be, Baigelman piles on improbability after improbability, throwing in everything he can think of without rhyme or reason. Characters appear, disappear, and then reappear later with no real sense given for their actions, and, before long, you just want to throw up your hands in exasperation. It's all too much. Reeves and Diaz never ignite the screen as the star-crossed lovers and the hugely talented D'Onofrio wanders around in a perpetual daze, riffing, mumbling, and acting more than a little like a psychotic Ernie Kovacs from Bell, Book and Candle. Indeed, the biggest acting coup here comes by way of Courtney Love, whose cameo as an obliging waitress is the best thing the film has going for it. Baigelman's mixture of off-the-cuff humor and Twin Cities noir never quite gels the way you think he hoped it would, and the result is an unfortunately listless, scattershot mess. 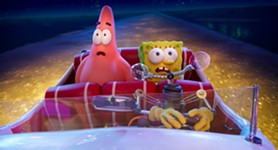