Who knew that a riot led by drag queens outside a nondescript Greenwich Village bar called the Stonewall over 25 years ago would be mythologized as the birth of the American gay political movement, remembered as the drop of a high heel heard 'round the world? All romanticized notions aside about its place in history, the Stonewall riot marked the rare instance -- if not the first time -- that gays fought back in response to the humiliating treatment inflicted under the color of law. Stonewall attempts to compress the sociocultural context in which this seminal event occurred into a two-hour running time; it succeeds, for the most part, in its objective. It accurately portrays the apolitical black and Hispanic drag queens as unwitting revolutionaries who simply refused to take more abuse; it effectively depicts the benign nature of homosexual organizations such as the Mattachine Society, which sought acceptance in the straight world through nonconfrontational means. (Given the historical information imparted here, it's no wonder that the Austin Gay & Lesbian International Film Festival recently honored Stonewall with its Festival Mission award.) Unfortunately, this ambitious film is a little disjointed and diffuse, no doubt due to its ambitious scope; even its Greek chorus of doo-wop cross-dressers, lip-synching Sixties girl-group songs intended to link the film's narrative threads, can't bring it all together. What's more, the protagonist -- the likeable Matty Dean, a country boy with a radical bent this side of ACT UP -- is somewhat anachronistic, seemingly meant more to represent a contemporary perspective of today rather than a character of the time. (The fact that he has the courage to finally acknowledge his love for a man who dresses as a woman, rather than take the safer route of a “whitebread” boyfriend, is free of contrivance, largely thanks to Weller's performance as Matty and Diaz's turn as his lover.) All of this is not to say that Stonewall isn't worth seeing, particularly for those who have inherited the legacy of that balmy June night in 1969. For them, it's a history lesson worth learning. 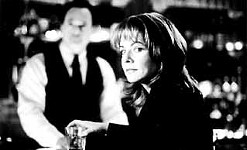 The Business of Strangers
Middle-aged executive Julie Styron (Channing) takes a limo to her business pitch, sporting Prada and pumps and firing off edgy retorts on her cell. Her ...