“This ain't no 90210,” quips Patti (Taylor), a high school senior in writer-director Jim McKay's provocative and edgy feature film debut Girls Town. And is she ever right. Far from the upper-class zip code of Beverly Hills, Patti and two of her best friends, Emma (Grace) and Angela (Harris), come to terms with their own lives when Nikki (Ellis), the fourth member of their group, commits suicide. Nikki's death broadsides the three friends. On the verge of graduating and Princeton-bound, Nikki seems to be just beginning her life. When Emma gets hold of Nikki's journal, however, the three friends realize that an undisclosed rape may have been one of the reasons behind their friend's self-destructive action. Nikki's rape and subsequent suicide mobilize Patti, Emma, and Angela to take action instead of taking cover from men. They start engaging in acts of vandalism and “outing” sexually abusive male students. Lest a guerrilla group of high school seniors sound a bit unlikely, viewers should keep in mind that their actions take place on a local level, aimed at other students and deadbeat, hurtful men like Eddie (Ventimiglia), the father of Patti's infant daughter Tomy (Pratt). With its complex characterizations and nuanced script, Girls Town manages to flesh out these teenaged girls, a rare feat for any film let alone a directorial debut. With Taylor's rich performance leading the pack, the actors allow their characters to be as contradictory as teenagers often are, particularly those teens who are on the verge of leaving high school for parts unknown. Although the script (co-written by McKay, Denise Casano, and actors Taylor, Harris, and Grace) doesn't necessarily condemn the girls' actions, it doesn't glorify them, either. While other characters pepper the film with insightful comments about the ramifications of such guerrilla tactics, Patti's, Emma's, and Angela's retorts often carry just as much logic. Where the film succeeds best is in its dialogue, which captures that precarious, teenaged balance of powerful insights and inane commentary. Girls Town has its weak spots, and the way in which grief for Nikki's death is barely registered by Patti, Emma, and Angela reduces the event to only an impetus for their fighting back. Generally, though, the film portrays an often-disenfranchised group with compassion, respect, and humor. To paraphrase a passage from one of the character's journals, Girls Town illustrates how these young women express themselves in ways that compensate for the words they do not yet have. 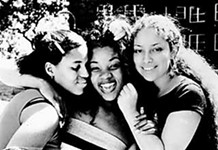 Our Song
Three girls in their mid-teens are growing up in Crown Heights, Brooklyn, the best they can. Part of growing up, however, means making choices, growing ...