Venezuelan director Fina Torres (Oriana) produces, writes, and directs her second effort entitled Celestial Clockwork, a film that has moments as infectious as the ever-present smile on lead actor Ariadna Gil's (Belle Epoque) luminous face. Gil plays Ana, an aspiring opera singer who bolts for Paris midway through her wedding vows in her native Caracas. Leaving behind a perplexed family and the suggestion of a limited future, Ana flees to the City of Light in order to pursue her dream of becoming the next Maria Callas. Upon arrival, Ana contacts friends of relatives and ends up rooming with four Latin American women, one of whom is the seductively dangerous postmodern video artist Celeste (Dombasle, best known from Pauline at the Beach). Very much like the character of Cinderella, Ana must learn to navigate by herself and avoid the manipulative orchestrations of the evil “stepsister” Celeste, whose jealousy of Ana's beauty and talent knows no bounds. Aiding Ana in her journey toward stardom are a variety of eccentric friends and acquaintances. Psychoanalyst Alcanie (Didi) offers friendship and a place to stay when the apartment of Ana's friends becomes unbearable. Fellow waitperson Armand (Longbois) continuously updates Ana on her future and guides her with his celestial forecasts. When Ana learns of an audition for the lead in a production of Rossini's opera Cinderella by noted Italian director Italo Medici (Homar), she enlists the help of all of her friends in an occasionally over-exerted but never dull attempt to prove herself worthy of the part. Torres' script (recently purchased by Disney for an American remake) pays homage to fairy tales and 1930s screwball comedies as it fills the screen with kooky characters, zany situations, and magical solutions. All of the characters are lovable in their eccentricities, and even the scheming Celeste comes off as deliciously wicked rather than strictly evil. Energetic performances by both Gil and Dombasle create an engaging tension in Celestial Clockwork. Torres seems to have a fairly keen sense of when to lighten the load and when to throw in a dash or two of melodrama. Blessed with a script that is sung as much as it is spoken, Torres' Celestial Clockwork becomes a musical valentine to art, love, friendship, and fate. 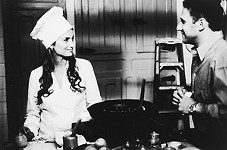 Woman on Top
Speaking as one whose culinary skills have played a key role in many of the “entries” in my personal book o' love, I've always been ...