Bruce Springsteen mused lyrically about the opposite sex in his song “She's the One,” and writer-director Edward Burns (The Brothers McMullen) makes a similar but unsuccessful attempt on the screen with his second feature, also titled She's the One. As a big fan of Burns' first feature, I was fully prepared to fall all over his second effort. Boasting two known television actors, a well-crafted soundtrack by Tom Petty, and some positive word-of-mouth, Burns' latest film seems to have a lot going for it. Choosing familiar territory, Burns' story focuses on two Irish Catholic brothers and their rather warped dealings with the women in their lives. Burns plays Mickey Fitzpatrick, the wayward older brother to McGlone's Wall Street broker Francis. The Fitzpatrick clan is presided over by the tough-as-nails elder Fitzpatrick (Mahoney), who constantly berates his sons for their supposedly “girlish” ways and dishes out crappy advice about life and love. When Mickey meets and marries Hope (Bahns) within the span of a weekend, tension erupts between the two brothers. Francis' unhappy marriage to wife Renee (Aniston) clicks into miserable focus, and Francis' affair with fellow broker Heather (Diaz) threatens all of the already unstable relationships in the film. Typical of a second film, She's the One has more polish than Burns' first feature. In gaining cinematic sophistication, however, the film loses any of the freshness and charm that was present in the dialogue and characterizations in The Brothers McMullen. In She's the One, the characters are generally unlikable, and only toward the end of the film do they begin to show any kind of depth. Obviously a move made to demonstrate how Mr. Fitzpatrick's half-cocked advice has taken its toll on his sons' lives, the payoff is too little too late. Even the father's inspired observation that the women are out living their lives while the men are sitting around trying to find theirs did little to revive my sympathies. By that point in the film I had given up on just about everyone. While most of the players do an adequate job with their roles, Burns' real-life girlfriend and muse Maxine Bahns delivers her lines without inspiration. As Francis' wife Renee, Aniston provides one of the few bright spots in She's the One. Playing Renee as the wry voice of sanity among the rest of the characters, Aniston shows that she's the one who makes this film somewhat enjoyable. The film's tagline describes it as “a romantic comedy about two brothers...and the one thing that came between them.” This “thing” appears to be the women in their lives, and if this description sounds even slightly misogynistic, perhaps it does so for a reason. 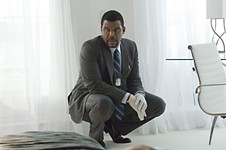