It's rare that a sequel lives up to its predecessor in either box-office revenue or audacious storytelling, but it's also rare to find one this truly awful. Not since Weekend at Bernie's II has there been such a ham-handed, unfunny, downright unpleasant foray into Quick Buck Filmmaking as this one. While the original Brady film worked surprisingly well in its juxtaposition of America's favorite Seventies sitcom family against a backdrop of Nineties sensibilities, A Very Brady Sequel does little more than rehash old plot episodes and offer up a genuinely tedious glimpse into the minds of several faltering screenwriters whose definition of irony appears to be Alice the maid's disturbing double entendres. Nearly all the original cast returns from the first film, but even their spirited, eerie recreation of surreal Seventies kitsch can't help move along the tired plot or keep the bad gags from flowing. Plotwise, the film hinges on the decidedly Addams Family-esque reappearance of mother Carol's (Long) long-lost husband Roy (Matheson) who was feared to be lost at sea many years before. Is it the real McCoy, or just a fake-out to bilk the Bradys of a priceless heirloom? I don't think I'll be ruining anyone's weekend by admitting it's the latter. While Mike (Cole) and Carol try to work this new addition into the Brady brood, Roy's busy trying to maintain his sanity in the face of rampant Bradyism. There's an interesting subplot about a bizarrely incestuous attraction between the elder Brady kids, Greg (Barnes) and Marsha (Christine Taylor), but even that goes nowhere, and the family's much-ballyhooed return to Hawaii occurs only in the film's closing minutes (and, of course, the late Vincent Price is, sadly, nowhere to be seen). Hideously directed with all the comic subtlety of Oliver Stone on speed, A Very Brady Sequel misses almost every single mark it sets for itself, from the disastrously ill-conceived animation that marks Roy's hallucinogenic mushroom trip at the family dinner table to the persistent background hiss on the film's soundtrack. Even Sherwood Schwartz would've hated this dog. 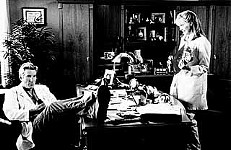 Dr. T & the Women
The mere presence of a new Robert Altman film in the theatres will be enough to draw in the regular connoisseurs of maverick film art. ... 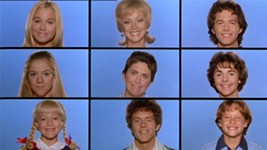