The Island of Dr. Moreau

Watching Brando in The Island of Dr. Moreau, you find yourself wondering: Is he the most brilliant actor who ever lived or the most accomplished charlatan of his profession? In this third film adaptation of H.G. Wells' science fiction novel about an exiled scientist who genetically melds animals and humans, Brando mesmerizes you with what appears to be only the slightest effort, much as he did in Don Juan DeMarco. Wearing a mouth prosthetic that gives the appearance of a slight overbite and speaking in a measured British accent, Brando portrays Dr. Moreau as an eccentric and benevolent madman, a kinder, gentler version of Colonel Kurtz. While Brando's technique is amazing -- his naturalness is relaxed, yet studied -- it doesn't do much in explaining his character's motivations or in explicating the film's thematic conflict between the id (as embodied in the beast) and the superego (as embodied in human civilization). Which is just as well, given that The Island of Dr. Moreau falls short elsewhere as well. It never becomes a cautionary tale about the foibles of playing God, as Frankenstein did, and it fails to provoke much more than a raised eyebrow in its depiction of the law as a means by which to enslave. A troubled production from the word go -- its initial director, Richard Stanley, was fired after the first few days of filming; actor Rob Morrow quit shortly after production started; and Kilmer, by his own making, became a pariah on the set -- it is a wonder that The Island of Dr. Moreau isn't an unsalvageable mess. When the man-beasts predictably revolt and order breaks down, there's a promise that the film is about to enter a fevered, delirious state when Kilmer shows up stoned out of his mind, dressed up like Brando in all-white garb and mumbling like Stanley Kowalski. That promise is short-lived, however, as Frankenheimer resorts to gunfire and explosions to bring the film to its predictable end. It's when things get mundane that you find yourself wishing that Brando would reappear on the screen to make things interesting again. After all, how many times have you seen an actor of his stature play an entire scene with an ice bucket on his head? 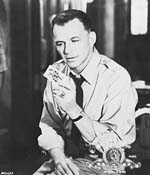 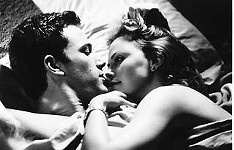