A dizzying fantasy flick that never takes itself too seriously, Iceman Cometh (perhaps better known under its more appropriate handle, The Time Warriors) is probably Hong Kong cult director Clarence Ford's most accessible movie. Ford's out-of-control filmography includes such outrageous gems as the gleefully berserk The Black Panther Warriors and the unforgettably lurid Naked Killer (an exciting, well-crafted adventure picture even if, with a running time of just over two hours, it's too long by at least 20 minutes). Dragons Forever alumnus Yuen Biao stars as a disgraced Royal Guard who, along with the brutal rapist he's been tracking (Yuen Wah, who also brought us great villains in Eastern Condors and the Dragons Forever), is transported 300 years across time from Ming Dynasty Beijing to modern-day Hong Kong via a magical, spinning “Wheel of Buddha.” Once there, Biao is taken under the wing of a somewhat conniving, but generally good-natured (is there any other kind?) prostitute played by the irresistible Maggie Cheung Man-yuk (The Days of Being Wild), who puts him to work as her personal bodyguard, chef, maid, and all-around slave. Meanwhile, Wah is busy rising up through the ranks of a local Triad gang, while at the same time fashioning a plan to return to his time of origin and take over with the help of a cache full of 20th-century heavy artillery. It all leads to a thrilling climax in which the two Yuens go head-to-head in a final battle that puts swords, guns, grenades, fists, feet, and steel sculptures all to good use. Sure, the movie is overlong, the plot is ludicrous, and the rinky-dink musical score would sound more at home in a Police Academy sequel than an action movie like this one, but the over-the-top performances, coupled with Ford's manic direction (it's hard to believe that this is his most restrained film), nevertheless make this a worthwhile venture, even if it falls considerably short of its full potential.

Once Upon a Time in China
Set in the turbulent world of 19th-century China, University of Texas alumnus Hark has fashioned an epic tale of a country and its people in ... 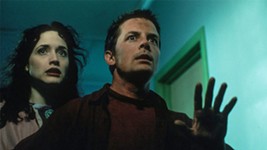