Tales From the Crypt Presents Bordello of Blood

The Dennis Miller Show… with nekkid vampire-vixens. That's it in a coffin-nail, but I doubt anyone's going to let me off that easily, so… Part Two of a projected trilogy of Tales from the Crypt films, Bordello of Blood never quite reaches the breathlessly mediocre heights of its predecessor, Demon Knight. Instead, director Adler cranks up the tits and gore waaay past 11 and turns wiseacre Miller loose to riff his way through what might otherwise be a completely unsalvageable mess. (Oddly, Adler helmed two of the television show's more impressive segments, Death of Some Salesman and You Murderer.) Fans of Miller's biting, oh-so-sarcastic wit will get at the very least a nominal kick out of seeing him in what is essentially a major starring role, and to be honest, the King of Obscure References gets in more than his share of fine lines. And then, on the other end of the film- capability spectrum, there's supermodel Angie Everhart as the queen vampire Lilith. Personally, I felt more threatened by her Amazing Three-Dimensional Chest and collagen-dehanced line readings than I did by her sub-par transformation scenes (but then I don't get out much anymore, so maybe everyone looks and talks like that these days? Yeah, I didn't think so). Genre goofs Corey Feldman and Chris Sarandon, late of The Lost Boys and Fright Night, respectively, are on hand as well, but predictably add little to the proceedings, and so it's up to the gore and gags to save the film. The gore -- from top-flight Kevin Yagher Productions -- is all over the place, but far from top-flight, and the gags? Well, apart from one brilliant throwaway newspaper bit involving William M. Gaines, the original creator of the Fifties-era EC Comics the show is based on, it's Miller's show all the way. And believe me, when he says, “Gee, I feel like I'm in a bad Tales from the Crypt episode,” you'll know exactly what he means. 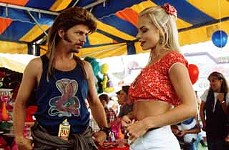 Joe Dirt
If you really, really want to spend 90 minutes on a picaresque adventure through the gator farms and fireworks stands of Roadside America, with a ...