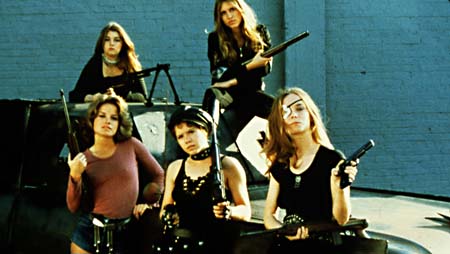 There once was a girl who had a great big curl right in the middle of her forehead, and… she was a Switchblade Sister. Actually, she was a Dagger Deb and her name was Lace (Lee). She was the leader of the gang, and when she was bad she was very, very bad. But after Maggie (Nail) joined up, things turned horrid. The strife thrusts Maggie into leadership of the gang and in an electric declaration of the girls' right to be “impudent,” Maggie re-dubs the Debs as the Jezebels. Girls and their gangs provide the sensationalistic subject matter for Jack Hill's 1975 exploitation movie Switchblade Sisters. Jack Hill was one of the great exploitation filmmakers whose pictures possessed a winning combination of stylistic wit and box-office appeal; some of his best work includes the bizarre cult favorite Spider Baby, two women-in-prison gems The Big Doll House and The Big Bird Cage, the defining Pam Grier vehicles Coffy and Foxy Brown, and the ever-delightful Swinging Cheerleaders. Switchblade Sisters, however, went belly up during its initial release and now, 20 years later, Jack Hill's biggest fan, Quentin Tarantino, has released the girl-gang picture under his Rolling Thunder distribution label (which, by the way, has a very neat animated logo). Yet with or without the Tarantino blessing, Switchblade Sisters is a nifty little movie, full of all the lurid teases, off-the-cuff production values, and trenchant topicality that make exploitation movies the fascinating cultural time capsules and filmmaking treasures that they are. Half-kitten, half-viper, these high-school gang girls are a muddled urban lot who confront as they come the inside treacheries, their jerky but beloved male counterparts in the Silver Daggers, the sadistic and predatory lesbian prison matron, the rival gang who's moving into their school territory, and the black female revolutionary who quotes Chairman Mao and stockpiles firearms in an abandoned police station. Switchblade Sisters moves along at a fast clip that staves off any concerns about the plot's sillier aspects and uneven performances. The payoff is that Switchblade Sisters provides one helluva slice of life.

From the Vaults: 'Spider Baby'
A restored print of 'the maddest movie ever told' screens Sunday 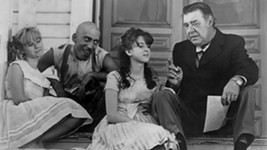