Not reviewed at press time. What a dump! No, not the movie; I haven't had the opportunity to see it, so I'm in no position to say. What I'm referring to is the shabby treatment accorded this blaxploitation revival film that was released nationally this past May. At that time, the distributor of Original Gangstas, Orion Pictures, chose not to open it in Austin. When I asked one of the distributor's representatives why, I was told that a decision had been made to open the movie in 40 theatres throughout Texas, and Austin just didn't happen to contain any of those theatres. Talk about your pathetically out-of-touch marketing decisions. Remember, this is the town that just played host to the 30-film Quentin Tarantino Festival of self-described “sleazy genre films.” Do we really believe that there's no perceived audience in Austin for a film starring absolutely all of the blaxpoitation cinema's greatest stars and directed by the one and only Larry Cohen (actually, there are two filmmakers named Larry Cohen, but trust me, this one here is the real one and only -- the director who made such treats as It's Alive, God Told Me To, The Private Files of J. Edgar Hoover, and Hell Up in Harlem. Now, to add insult to injury, Original Gangstas has slid into town three months after its American debut for an unheralded run at an Austin “dollar” theatre house. Once again, I repeat: What a dump! 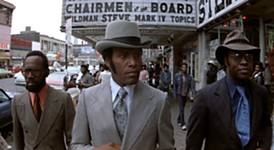