By virtually anyone's standards, Jack – a listless family comedy and bland morality primer – would be a one-star movie, the kind of thing that's designed to make you laugh and make you cry, but leave no nasty tear-stain residue. But when Francis Ford Coppola – the director responsible for such cinematic landmarks as Apocalypse Now and The Godfather – stoops to such syrupy swill, for me that single star drops down to a full-fledged bomb. Granted, it's been a while since Coppola pulled off anything close to “magnificent,” but experiencing Jack is almost as alarming as waking up with a severed horse's head in your bed (to steal an image from the master). Then there's the disquieting thought that Coppola is more or less remaking a movie that already was a big hit for Penny Marshall not too long ago. One senses with the picture a further sign of the creeping Disneyfication of America, if not the universe, and the fact that Coppola is releasing movies under their banner is one further sign of the apocalypse now. I know it's churlish to chide a movie for taking the easy road to popularity (especially after all of Coppola's legendary tribulations while bringing various visions to the screen), but the easy road looks awfully similar to the lazy road this time. For example, Coppola has now joined the ever-growing ranks of film fart humorists. And was the decision to shoot Jack in the San Francisco area – home to Coppola and star Robin Williams – merely a strategy for saving on toll calls when these two phoned in their work? Williams, as the 10-year-old boy trapped in a 40-year-old's body, has few really convincing moments and plays the whole thing by rote. Notably absent are any of the performer's inspired flights of fancy and zaniness. In addition to Coppola, Williams seems, to have shifted to auto-pilot, and has become something of a Hollywood poster boy for the “inner child” within us all. Suspicion that Coppola's soft spot for Jack might have something to do with the emotional baggage he still carries following the death of his own son several years back would be confirmed by the movie's closing dedication. Empathy for a father's grief, however, does not stamp out the dismay over the homogenization of a once-great artist. And them, I'm afraid, are the facts, Jack. 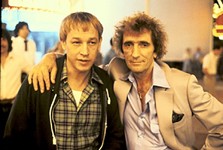 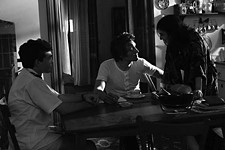