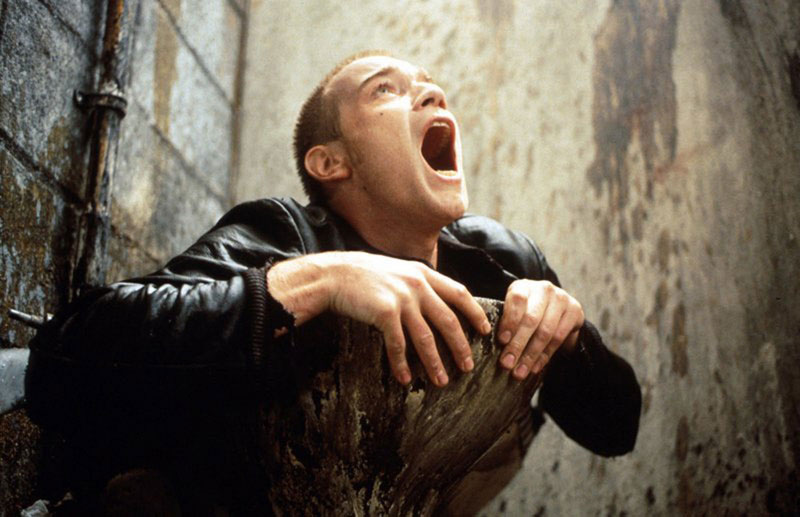 Two young men are hurtling down a street as Iggy Pop's incantatory ode to survival, “Lust for Life,” blasts through the theatre's speakers. Concurrently, a voiceover, with a thick Scottish accent, sardonically disembowels society's empty exhortation to “choose life.” Trainspotting is a modern-day movie about the experiences of some unrepentant Scottish junkies, yet in its opening moments, Trainspotting spiritually resembles nothing so much as the Beatles' careening burst of adrenaline-charged “devil-may-care” in their introductory movies, A Hard Day's Night and Help! Hardly cute and cuddly moptops, these Trainspotting rogues are, nevertheless, driven by similarly simplistic formulas. In the movies, the Beatles race along trying to stay one step ahead of crazed fans and other pursuers; action for the Trainspotting crew is solely motivated by the need to fix and score. Instead of the social-realism approach taken by most movies dealing with drug subcultures, Trainspotting observes its subjects with a mordant eye -- an inclusive perspective that permits humor, exhilaration, wit, and hyperbole to mingle with stark realism and dingy morality. Some have (falsely) interpreted this stance as a dangerous glorification of heroin, but Trainspotting really remains neutral on the subject. Heroin, with its pitfalls and pleasures, is merely a fact of life, and so are the subcultures and lifestyles it generates. The movie does not ignore the drug's harrows, but neither does it deny heroin's intractable lure and efficacy. In fact, the movie's most pathologically violent and twisted character is an alcoholic who never touches heroin. Trainspotting plainly includes various heroin-related tragedies such as AIDS, crib death, and personal betrayal, but it also resorts frequently to humor and exaggeration in order to drive home other points. (The most obvious example of this is the scene in which a character swims into the most disgusting toilet/cesspool of feces in order to retrieve a couple of heroin suppositories he unwittingly excreted, thereby showing in an astonishingly vivid, surreal, and unforgettable manner the literal depths to which one can sink in the quest to score.) The same Scottish team (director Danny Boyle, producer Andrew Macdonald, screenwriter John Hodge, and actor Ewan McGregor) responsible for 1994's surprise low-budget hit Shallow Grave reunite here for Trainspotting despite serious wooing and many lucrative proposals from Hollywood financiers. Also retained for this sophomore effort are many of the same crew members who worked on Shallow Grave. Additionally, Irvine Walsh, the author of the novel on which Trainspotting is based, appears as a drug dealer toward the end of the movie. At times, the Scottish accents seem difficult for Americans to penetrate, and the characters' dexterous use of slang and subculture references do not make things any easier. Yet the ear, if permitted, adapts quickly to the foreign cadences, and though some of the specifics and nuances may pass unclarified, isn't that the way of all subculture lingo? The on-target performances, along with the unceasing barrage of popular music and daring narrative gambles, combine to make Trainspotting one of the grand movie rushes of 1996.