That the advertisements for Joe's Apartment proudly proclaim it to be “MTV's First Movie” might seem tip-off enough to anyone who's charted the rise of that now all-powerful music network. However, Payson's original 1992 short film, upon which this expanded feature is based, was indeed a marvelous creation, loaded with dark wit, ingenious editing, and East Village charm. Unfortunately, this new version fails to hold up to its predecessor. Payson's film follows the day-to-day rut of Joe (O'Connell), a young slob fresh off the bus from Iowa, who lands a rent-controlled apartment in New York City's grim and grimy Lower East Side. The catch? Joe's new digs come complete with an all-dancing, all-singing infestation of cockroaches who are determined to help Joe out as he acclimates himself to life in the Big Apple. The roaches love Joe because he's a slob, and Joe manages to tolerate the presence of his 50,000 housemates through sheer will power and occasional oblivion (not that avoidance of the clamoring insect crowds is easy -- they tend to break into elaborate, Busby Berkeley-esque chorus numbers at a moment's notice). While out searching for a job one day, Joe spies Lily (Ward), the beautiful and idealistic daughter of a New York senator (played by Robert Vaughn), who just happens to be scheming alongside Joe's corrupt landlord (played by Don Ho). It's not long before love is in the air (along with countless buzzing cucarachas), although Joe -- amiable oaf that he is -- isn't quite sure of how to woo the upper-class Lily. Add to this a number of odd subplots involving Joe's performance-artist pal Walter (Jim Turner) and Vaughn's relatively unexplored penchant for women's undergarments, and you have a very original but woefully uneven debut. With a goofy “what next?” grin permanently plastered across his face, O'Connell is fine as the transplanted Iowan, though you get the feeling that both he and Ward still feel themselves bound by the restraints of an MTV short. Much of the editing here comes from the video school: rapid cutaways and montages, crazily skewed angles, and a pulsing soundtrack. It's not the sort of style that holds up well for 80 minutes, but Payson, admittedly, seems to be doing his best. It's not enough, though, when the roaches (led by the voices of Billy West and House Party director Reginald Hudlin) steal the show every time. Their Greek chorus bits may seem straight out of Babe, but the use of animatronic puppet and live-action cockroaches is wonderfully clever. It's just too bad the rest of Payson's film wasn't as entertaining.

Endangered Species
Make a donation to a conservation charity instead 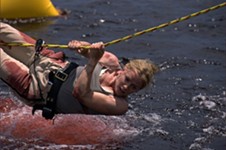 Piranha 3D
Finally, 3-D is being put to its optimum use. Who cares how it holds up as a remake?