The Adventures of Pinocchio

In The Adventures of Pinocchio, director Steve Barron (Coneheads, Teenage Mutant Ninja Turtles) assumes a daunting task in retelling the classic story of the wooden puppet and his kindly “father” Geppetto that was brilliantly brought to the screen first as an animated feature by Walt Disney in 1940. However, Barron makes good use of Nineties technology in adapting the tale to include live action and animatronics by, among others, Jim Henson's Creature Shop, the special effects team behind Babe. Based on the tale by Italian writer Carlo Collodi, The Adventures of Pinocchio tells the story of Geppetto (Landau), a lonely woodcutter and puppet maker whose sole family consists of the elaborate wooden puppets he lovingly carves. Burdened by an unrequited love for his late brother's wife Leona (played by French actress Bujold, in her first American film in years), Geppetto immerses himself in the world of his puppets. When a log with magical powers lands in his wheelbarrow, Geppetto carves his own little boy puppet and christens him Pinocchio. What happens next literally brings new life to Geppetto and the town in which he lives. Pinocchio and Geppetto's encounters with the despicable showman Lorenzini (Kier, last seen in Barb Wire) provide the film's most suspenseful and enjoyable moments, while Pinocchio's attempts to fit in with “real” boys emphasize the film's theme about the difficulties of being an outsider. Landau (Ed Wood) is perfectly cast as the slightly befuddled but truly well-intentioned puppet maker. Jonathan Taylor Thomas (Man of the House, television's Home Improvement) provides the voice of Pinocchio and appears as the puppet-come-to-life at the end of the film. But the true star of the film is the special effects-generated puppet, whose antics and actions are even more impressive for the way in which they create a three-dimensional, endearing character. Nearly as impressive are the film's lavishly detailed sets, particularly in the scenes featuring Lorenzini's elaborate puppet show and the mysterious Terra Magica amusement park. Other, less significant aspects such as a pesky woodpecker make it an enjoyable experience, particularly for the audience of children with whom I viewed the film; they seemed truly entranced by the spectacle of Pinocchio. Unlike its Disney predecessor, though, the film's score is not memorable, and a few clunky attempts at modernizing the characters' dialogue fall flat. However, The Adventures of Pinocchio thoughtfully updates a children's classic with modern effects wizardry whose appeal may even transcend the tale's targeted younger audience. 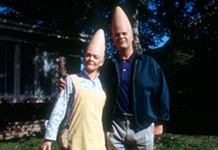 Coneheads
What could have resulted in a 90-minute blow-up of a five-minute premise (remember Bob and Doug McKenzie's Strange Brew?) has instead, thankfully, arrived as a ... 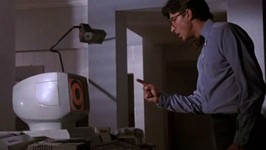