What's the difference between the volcanic islands of Iceland and Japan? Everything and nothing, as the Japanese traveler Hirata (Nagase) discovers in this odd but pleasing road movie. Hirata's yuppie vacation plans for a golf excursion to Hawaii are scuttled when his aged grandfather beseeches him to travel to the remote spot in Iceland where Hirata's parents died and there perform ceremonial rituals that will put their spirits to rest. Obligatorily, Hirata departs Japan for Iceland and things immediately start getting weird. For starters, the screen image switches from the squarish 1:66 aspect ratio seen in the opening Japanese segments to a sudden 2:35 widescreen image upon its arrival in Iceland. It's somehow appropriate for this movie in which the great, barren, frozen expanses become a virtual character. A bus from the airport takes Hirata to a strange warm-water natural pool in the midst of the icecaps. Next, a cabdriver recites odd Icelandic information (like how sheep outnumber people), but Hirata ditches the cabbie when he disappears during a pit stop and is inexplicably found in the middle of some strange baptismal ceremony. Some others Hirata encounters include the self-described “funeral collector (Hughes) who travels for pleasure from service to service,” the bickering American couple (Taylor and Stevens) who earn a permanent spot in the Hitchhikers from Hell Hall of Fame, the remote cowboy bar where the patrons eat ram's testicles and drink a potent liquor called Black Death, and the ghostly apparition whose screech can make ice mountains crumble. Cold fever, indeed. It's as though Hirata is stuck in some kind of bizarre, cross-cultural hallucination. But this shouldn't be unfamiliar turf for Masatoshi Nagase, the actor who plays Hirata. He is, probably, best remembered on these shores as the actor in the Japanese segment of Jim Jarmusch's Mystery Train. Furthermore, Cold Fever is produced and co-written by Jim Stark, who has produced several of Jarmusch's offbeat road movies (Down by Law, Mystery Train, and Night on Earth) as well as several other major American indie films (Gregg Araki's The Living End and Doom Generation and Alex Rockwell's In the Soup). Director Fridriksson is one of Iceland's most original filmmakers, whose films Children of Nature and Movie Days have received many awards and much acclaim. Cold Fever is thoroughly quirky and unusual, and one-hundred-percent experiential. You've got to sweat it out in order to get to the other side. 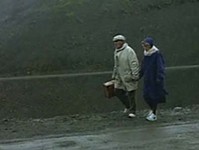