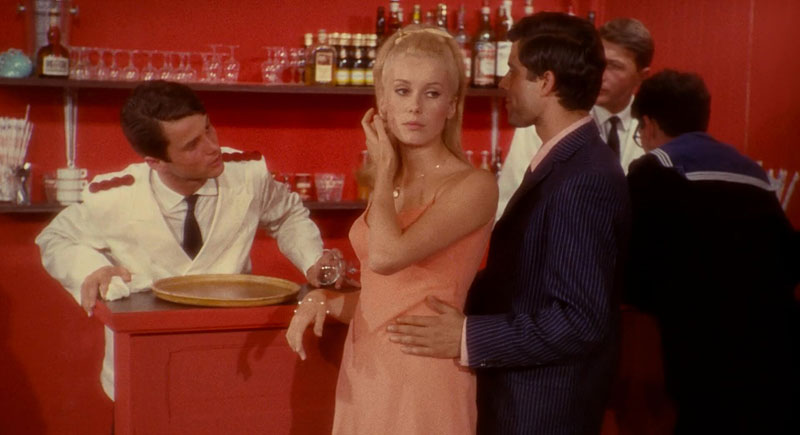 The Umbrellas of Cherbourg

This cinematic pop opera is a disorienting, strange experience at first -- every word is sung, even the most banal of dialogue -- but only the most cynical will ultimately resist the unique allure of The Umbrellas of Cherbourg. (Those who resist this film -- and there will be a few -- have to work hard to do so.) Initially released in 1964, this simple yet sophisticated French film tells the story of two star-crossed lovers, a 16-year-old shopgirl and her gas-station attendant sweetheart, without any apology for the unashamedly romantic heart. Its tale is one recounted many times before -- boy loves girl, girl loves boy, boy leaves girl, girl discovers she's pregnant… -- but as told by Demy, with the inestimable assistance of Michel Legrand's lush and sentimental score, The Umbrellas of Cherbourg transcends its trite possibilities. Of course, the presence of the impossibly beautiful Deneuve and Castelnuovo as the film's amants could transcend anything -- what perfect specimens they are! Although some may dismiss the two as little more than the Gallic version of Ken and Barbie, both performers make an impression here; they're infectiously convincing when basking in the exuberance of love, and just as effectively persuasive when aching with heartbreak. The true genius of Demy's bittersweet film, however, is in its contextual artifice. The almost otherworldly sensation of constant song (thankfully, this restored version of the film is no longer dubbed) creates an alternate universe of communication, while the film's dominating color schemes -- Sixties hues of saturated pink, chartreuse, fuchsia, and cornflower blue -- stylistically define The Umbrellas of Cherbourg as an ersatz Hollywood Fifties musical in which the Technicolor is a couple of shades off. The visuals alone in this film are a trip: characters' clothes match the color of the wallpaper in a room, the buildings on the streets of Cherbourg are brightly tinted, as if in a Fauvist painting. In the film's last scene, in which the separated lovers are reunited on a snowy evening years after each has married someone else, The Umbrellas of Cherbourg takes on an even more dreamlike quality. Taking place on what appears to be a soundstage (but is not), the scene plays as if time and space were somehow disembodied from the reality, the falling snow looking like that in a delicately shaken globe. In this coda, Demy realizes a world in which resignation and regret about what might have been is an accepted fact of life. It's enough to make you sigh, and maybe even tear up. (See related story at www.austinchronicle.com/issues/vol15/issue46/screens.umbrellas.html).

The Young Girls of Rochefort
...