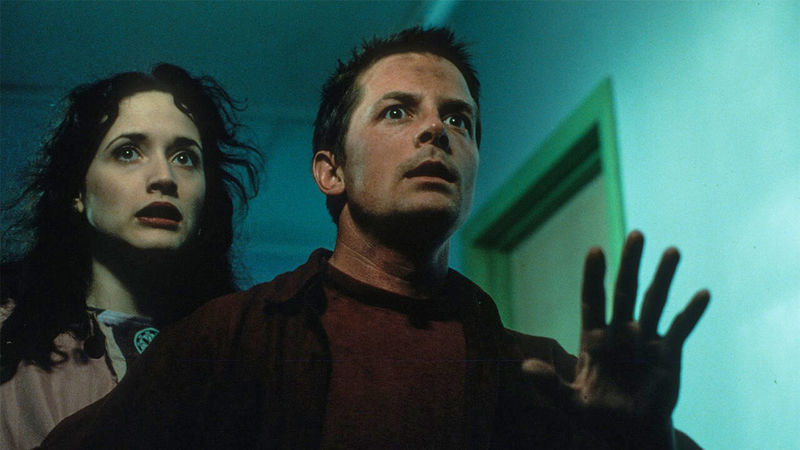 One hundred percent weird. Yes, innovative New Zealand director Peter Jackson -- whose unpredictable career has included everything from the gleefully perverse Muppet satire Meet The Feebles to the passionate “true crime” fantasy Heavenly Creatures -- has made the unlikely leap into mainstream Hollywood filmmaking, and the result, while far from perfect, thankfully finds his bizarre sensibilities left pretty much intact and proves, once again, that he is a filmmaker of tremendous energy and imagination, if not restraint. The complicated plot line casts Michael J. Fox as Frank Bannister, a young man who, following a peculiar automobile accident, has gained the ability to communicate with the dead. He's parlayed this unique talent into a small business by teaming up with a rowdy trio of renegade spirits who stage counterfeit hauntings that Bannister, while posing as a low-tech ghostbuster, then “solves” for large sums of money. Of course, the town is also experiencing a rash of curious deaths, which very well might be the work of the Grim Reaper himself. But what connection, if any, does Bannister have to these deaths? And what part does that mysterious, introverted middle-aged woman (Dee Wallace Stone), who is imprisoned at home by her maniacal, controlling, shotgun-toting mother, play in the mystery? And, oh yeah, did I forget to mention the obviously disturbed, possibly psychotic FBI agent (Jeffery Combs) hot on Bannister's trail? Or how about the demented serial killer (Jake Busey) who- ah, forget it. There's no way the whole of the movie's plot is going fit comfortably within the confines of a neat, tidy synopsis without giving away some major surprises, so I'm not even going to try. The screenplay, authored by Jackson with his fellow Heavenly Creatures scribe Frances Walsh (both of whom were Oscar-nominated for that very same script), is practically exploding with wild ideas, knowingly campy dialogue, and offbeat characterizations, but switches gears so fast and so frequently that the audience is left struggling to catch up as this twisted tale twists and turns its way unmercifully towards a literally out-of-this-world finale. (Yet, given the wealth of material that appeared in the movie's previews but was absent from the finished assembly, one can only speculate how well the original cut held together.) Even so, The Frighteners is still an enormously refreshing change of pace from the paint-by-numbers approach taken by so many of this summer's would-be blockbusters because it doesn't give you all the answers up front, and, even better, is more than willing to take chances (I guarantee you won't see another film this year in which a spectral cowboy takes time out during a hectic action sequence to vigorously hump a nearby skeleton). Throw in loads of cool special effects, Jackson's typically go-for-broke direction, a nice change-of-pace turn from Fox, and an incredible, scene-stealing performance from Re-Animator cult fave Jeffery Combs (who manages to turn peering around corners into something of a fine art), and you have a thoroughly preposterous movie that's as outrageously entertaining as it is relentlessly chaotic.