Where's Charlie Sheen? Hey, forgive me, but if it looks like a Charlie Sheen movie, sounds like a Charlie Sheen movie, and just plain feels like a Charlie Sheen movie, then dammit, where the hell is he? Probably off shooting The Arrival II, so instead of Sheen, we get the younger Baldwin brother and the brilliant Fishburne, who, actually, isn't all that brilliant here. The pair are convicts, chained together while working on an Atlanta road crew. When a fellow con gets ahold of a gun and kills most of the law officers in the area, they make a break for it and “fled.” (That this new, grammatically unorthodox use of the past tense in place of the present will soon be S.O.P. is inevitable. Sheen, however, cannot be blamed.) With a lethally overzealous FBI agent (Burke) on their tail as well as the Atlanta detective Matthew Gibson (Patton) who originally put Luke Dodge (Baldwin) away, they make their way over hill, over dale, to the house of Cora (Hayak). Having recently been dumped by her police-officer husband, she apparently has no qualms about letting a pair of prison escapees hang out and try on hubby's clothes, but hey, maybe she's lonely. Meanwhile, back at the station house, Gibson is grumbling to his boss about how he thinks Dodge may have been set up. As it turns out, he's right. As a lusty computer hacker (!), Dodge accidentally, unknowingly, stole $25 million from the Cuban mafia, as well as some very touchy-feely financial records that they'd like to keep out of the hands of everybody. Soon, the body count begins to mount. It's all just a little much, really, and Hooks' over-the-top direction doesn't really help. Neither does Hooks' glaringly obvious penchant for ripping off better action films: One scene is lifted in its entirety from Dario Argento's Opera, while another cops the bullet-riddled choreography of John Woo's hyperkinetic shoot-'em-ups. (Everybody steals from Woo, sure, but do they have to make it so obvious?) Even Patton, excellent as the smooth Atlanta cop on the convict's trail, can't save this mediocre descent into kiss-kiss-bang-bang clichés and one-note gags. Hayak, likewise, has precious little to do but look good and show off her much-improved command of the English language, which, unfortunately, now will include the incorrect usage of the word “fled.” 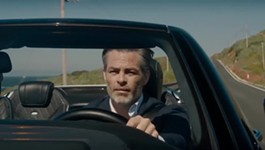 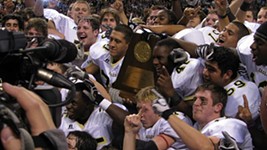