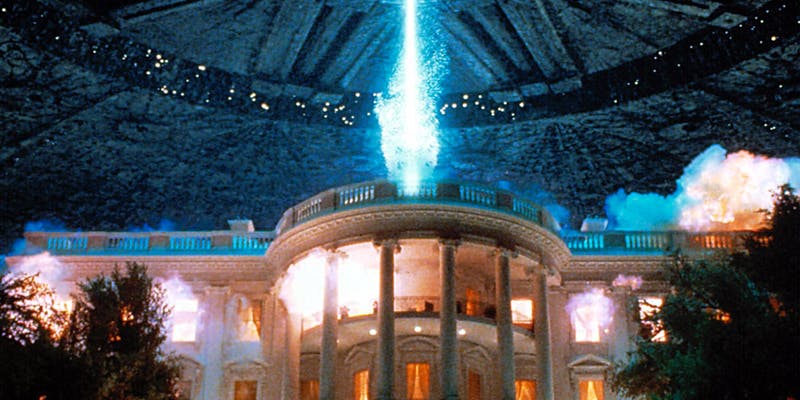 I thought the tagline for ID4 – “Don't Make Plans for August” – was pretty catchy until I saw the film and realized that something more along the tongue-in-cheek lines of “An Irwin Allen Production” might have been more on target. Never mind that Hollywood's famed master of disaster is no longer with us; ID4 bears so many of the Allen trademarks, it might as well be his swan song. It's the Earthquake of the Nineties, and like that film, director Emmerich (Stargate, Universal Soldier) has crafted a gasping, bloated roller-coaster ride that veers from scenes of truly awesome destruction to stretches of numbingly bad melodrama and back again. And, like Earthquake (or The Towering Inferno, for that matter), this conspiracy buffs' take on Close Encounters is a sure-fire summer blockbuster, in Sensurround or otherwise. Never mind that once you get past the admittedly breathtaking shots of our national landmarks being turned into kindling, the rest of the film is a tired and empty two hours of feel-good patriotism and oddly cast characters: This curiously unaffecting film has already reset the box-office high-water mark for the next 10 years. Plotwise, it's simple: Malevolent aliens in spacecrafts nine miles wide attack and destroy all of Earth's major cities, nearly bringing mankind to its knees before the American president (Pullman), a fighter pilot and soon-to-be family man Steven Hiller (Smith), and a nerdy genius/cable-TV ace David (Goldblum) concoct a harebrained scheme to save the world (“My God! That's so crazy it just might work!”). With an ensemble cast of truly brilliant players all the way from Connick, Jr., (actually it's just his Memphis Belle character updated a bit) to Gregg Araki regular Duval, you'd think Emmerich would have gotten a little more acting bang for his buck, but then judging from the dialogue with which the cast had to work, it's nice just to see Goldblum keep a straight face as Hirsch, as his crotchety Jewish father, leads Jew and gentile alike in a touching rendition of the Sh'ma. Oy, gevalt, indeed.